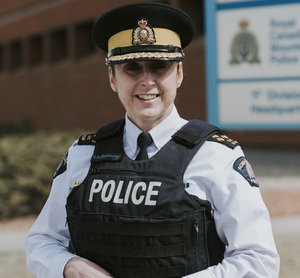 Assistant Commissioner Rhonda Blackmore has 25 years of service in the RCMP. She began her career in Saskatchewan where she performed general duty policing in Assiniboia, Regina and Buffalo Narrows for seven years.

In 2002, Assistant Commissioner Blackmore transferred to the RCMP National Headquarters in Ottawa. During her first nine years there, she successively joined the Operational Policy Unit, the National Division Emergency Response Team, the Criminal Intelligence Directorate of National Security Investigations and the National Use of Force Program. She was also seconded for a year in 2007 to Public Safety Canada to help with the renewal of the policing contracts with the provinces.

In 2011, she was commissioned to the rank of Inspector as the Executive Officer of the Deputy Commissioner in charge of Contract and Indigenous Policing. In 2012, she was seconded to the Ottawa Police Service as a Patrol Inspector for 6 months and returned to the RCMP as a Travel Officer for the Governor General of Canada His Excellency the Right Honourable David Johnston.

In late 2013, Assistant Commissioner Blackmore became the Officer in Charge of the National Use of Force Program, now known as the National Police Intervention Unit. In this role, she oversaw the implementation of 19 of the 64 MacNeil Report recommendations following the deadly shooting of three RCMP officers in Moncton, NB. These recommendations included the rapid expansion of the patrol carbine program and the creation and implementation of a mandatory Immediate Action Rapid Deployment training to respond to outdoor active threats. She also managed the implementation of the National Crisis Intervention and De-Escalation training and the introduction of new less lethal intervention options.

In May 2018, Assistant Commissioner Blackmore was promoted to the rank of Chief Superintendent and selected as the District Commander of Western Alberta. She supervised the operations of the Western Alberta District's Crime Reduction Unit, General Investigative Section and 24 detachments, who together serve the public over a geographical area of 280,000 square kilometers, close to half the Province of Alberta.

Assistant Commissioner Blackmore is originally from Hanover, Ontario and has a Bachelor of Physical Education from McMaster University.

She is the recipient of the RCMP National Headquarters Division Commanding Officer's Commendation for Outstanding Service, the IODE Police Community Relations Award, the Queen Elizabeth II Diamond Jubilee Medal, the RCMP Long Service Bronze Clasp for 25 years of service and is a Member of the Order of Merit of Police Forces.

In her spare time, she enjoys running, weightlifting as well as landscaping.