RCMP in the North

The RCMP has a long and proud history in Northern Canada dating back to the end of the 19th century. Frequently the only government presence in North America's harsh northern climate the RCMP has and continues to shape the north today.

Prior to 1886 not much was known about the part of the Canadian north which would become the Yukon Territory. A strike of coarse gold at the Fortymile River started the first gold rush in the area. A trading post was erected at the mouth of the Fortymile River in 1887 and marked the first gold rush town to be established in the region. Also, by 1889 Alaskan whalers had started to establish a winter base on Herschel Island in Canadian waters. The Canadian Government wanted to ensure that this district remained Canadian and was not annexed by the United States. 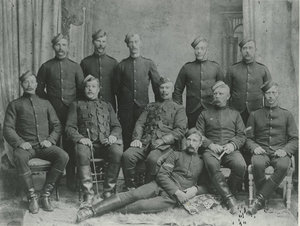 The situation changed in the summer of 1896. A "Bonanza" gold discovery was made on Rabbit Creek and the real gold rush began. Over the next two years tens of thousands of gold seekers arrived in the Yukon. As such, the NWMP presence in the area increased substantially over the next two years. Fort Herchmer was established at Dawson City in 1897. By 1898 there were two divisions in the Yukon ("H" & "B"), 31 detachments, 285 Members and 200 soldiers with the Yukon Field Force, to assist prospectors and deal with any problems that would arise due to such a sudden influx of people and a lack of amenities. 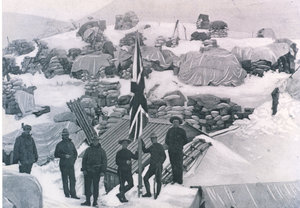 NWMP detachments were established at the summits of the White and Chilkoot passes along the Alaskan border during the winter of 1897-98. This was intended to prevent the lawlessness that was occurring on the American side of the border from spilling into Canada. The role of these detachments, which were set up in harsh winter conditions on the summit of a mountain, were to collect customs duties and to assist people adapt to the harsh realities of the Yukon. Many individuals who hoped to find a fortune in gold were completely unprepared for the cold and lack of food that existed in the area.

Sam Steele, one of the original Members of the North-West Mounted Police who participated on the March West (1874), arrived in the Yukon in February 1898 to take command of the district. During the early 1880's, Steele commanded a mobile detachment that maintained law and order during the construction of the new national railway as it progressed from the prairies to the Rocky Mountains. When he arrived in the Yukon he was both a policeman and magistrate for the thousands of people who were flooding into the area as a part of the gold rush. He was instrumental in maintaining law and order in the area. Dawson was built on two transportation corridors and had a serviceable port which made it a major shipping point for both men and equipment heading to the Klondike goldfields. Even though this made it a wild and boisterous town at this time it was safe due to the effective work of the NWMP.

North to the Arctic Shores 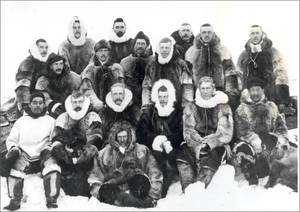 While the NWMP was active in the Yukon, it was also moving north towards the Arctic Circle at the same time. Patrols had gone as far as York Factory in 1890 and Fort Resolution on Great Slave Lake in 1897, but it wasn't until 1903 that the Force became highly active in the area. That year a dispute over the Alaskan border was settled in favour of the United States which led to increased Arctic Exploration. Detachments were established at Herschel Island and Fullerton in 1903 and by 1919 the entire arctic was under Canadian jurisdiction containing 25 detachments and over 70 men. 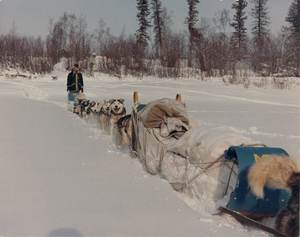 Prior to the use of aircraft by the RCMP the only way to serve isolated communities in the north was by dogsled. The area was monitored by a system of winter dog sled patrols where the Force brought Canadian law to the most remote northern regions. Members were frequently the only government employees in the region performing tasks ranging from law enforcement to mail delivery. The last dog sled patrol was made from Old Crow, Y.T. to Fort McPherson, N.W.T. in March 1969.

Indigenous people were hired as Special Constables by the RCMP as early as the March West (1874). Their main jobs were to act as guides and interpreters for the Members who did not know the area. This was especially important as the RCMP expanded into the Arctic after 1903. Many Inuit were hired to assist the local detachments and were essential ensuring the success of the many dog sled patrols.

Canadian Presence in the Arctic 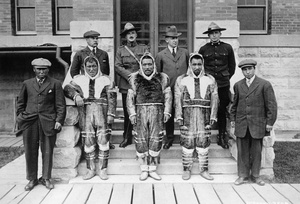 In 1913 two Inuit named Sinnisiak and Uluksak murdered two Oblate priests. Insp. LaNauze led an investigation that required extensive travel by dog sled throughout the north and eventually brought both men to trial in Edmonton in 1917. This is one of the earliest examples of criminal law being enforced amongst the Inuit. 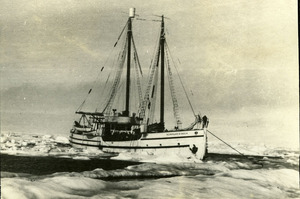 Between July 22 and October 16, 1944 the St. Roch returned to Vancouver via a more northerly route through Lancaster Sound and Barrow Strait in only 86 days. In doing so she became the first vessel to traverse the North-West Passage in both directions. She would make history one last time in 1950 after she travelled through the Panama Canal, making her the first vessel to completely circumnavigate the North American continent. Her seafaring days came to an end in 1954 and she is now a main attraction at the Vancouver Maritime Museum. 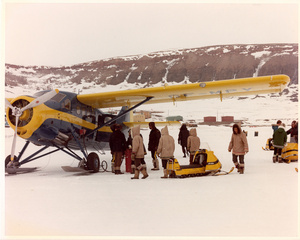 During the summer of 1933 Commissioner James Howden MacBrien inspected the RCMP's northern posts. He was transported by a Fairchild 71 which was provided by the R.C.A.F. By using an aircraft the Commissioner was able to cover over 11,000 miles which would have taken months by convention means. MacBrien, who was modernizing many other aspects of the RCMP, created an Air Section in 1937. Aircraft are essential for modern police work in the north. They are able to serve isolated communities by providing emergency supplies and medical aid.