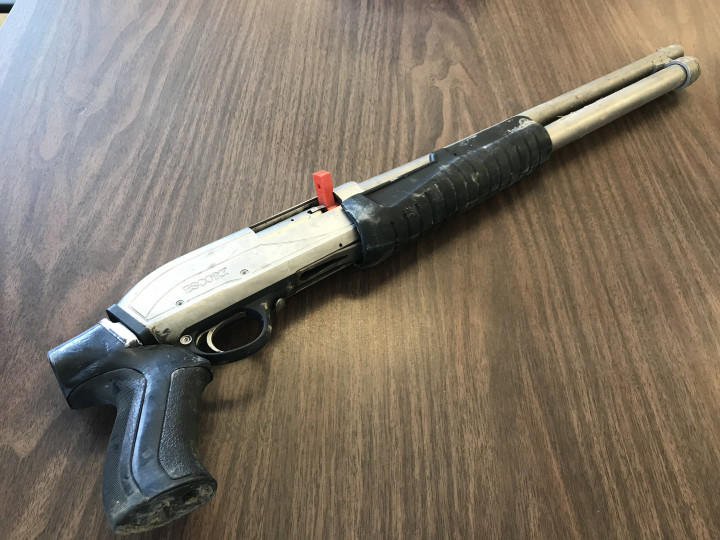 The RCMP have charged two people following an incident that saw a brief pursuit with a male in a stolen vehicle, which culminated in the male crashing the stolen truck and firing a shotgun.

On Oct. 14, at 7:47 a.m., the Sylvan Lake RCMP received a complaint that a truck was stolen from a location in Eckville. Neighbouring detachments were made aware of the stolen vehicle. Rocky Mountain House RCMP members on patrol located the truck on Highway 54 near Caroline.

The RCMP were following the truck with the intention of effecting a traffic stop when it made a U-turn on the highway and attempted to ram the police vehicle. A pursuit was initiated. The Rocky Mountain House Crime Reduction Unit was on scene to assist, and a tire deflation device was successfully deployed on the stolen truck. The driver of the truck continued to attempt to evade police by intentionally crashing through a gate, then getting stuck on a lease site. The male driver exited the truck and discharged a round from a shotgun. The driver was taken into custody by Rocky Mountain House RCMP. The female passenger was also taken into custody.

There were no resulting injuries to anyone, and no police vehicles were damaged during this incident. A loaded 12-guage pump action shotgun with a sawed off barrel was seized from the scene. A search of the truck led the RCMP to seize several pieces of stolen identification and credit cards believed to be from thefts across central Alta.

A 28-year-old female passenger is also facing numerous charges related to this and other incidents.

"An incident like this highlights the inherent dangers our RCMP members face on a daily basis" says Sergeant Trevor Shea, the Operations NCO of Rocky Mountain House Detachment. "I am pleased with how our members responded and how swiftly this dynamic event was resolved with no resulting injuries to anyone."