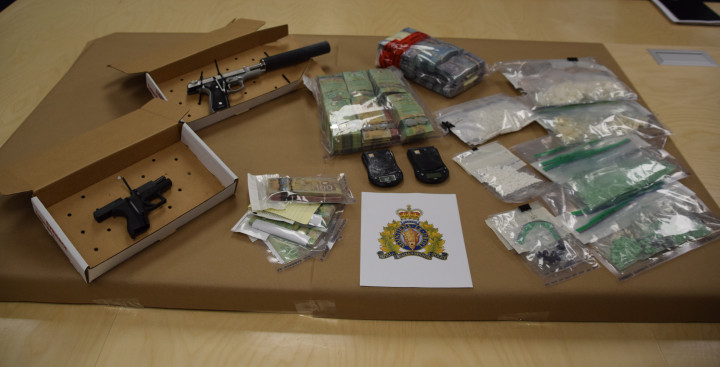 **Please note that an update has been added at the end of these speaking notes. They provide new information about people arrested as part of Project MONTEREY.

Good afternoon and thank you for coming. My name is Chan Daktari Dara; I am the Criminal Operations Officer for Yukon RCMP. We are here today to provide details regarding the recent and significant operation stemming from a six month long investigation spearheaded by the Yukon RCMP Crime Reduction Unit and called Project MONTEREY.

On June 1, 2022, the Yukon RCMP Crime Reduction Unit arrested four individuals and executed search warrants on two separate residences in Whitehorse, with the assistance of Whitehorse Detachment, the Federal Investigations Unit, the Major Crime Unit, and members of the Critical Incident Program including the Critical Incident Commander, the Emergency Response Team, and the Police Dog Service.

The four people who were arrested on June 1st are:

The Crime Reduction Unit seized the following items from the two residences:

Note: All drugs are currently being analyzed.

On June 3, 2022, the Crime Reduction Unit arrested an additional four individuals associated to the same investigation. These individuals were already incarcerated on other criminal matters.

As a result of Project MONTEREY, these eight individuals are facing a total of 29 charges related to drug trafficking, money laundering, proceeds of crime, firearms offences and failing to comply with conditions. But most importantly this group is also facing charges of participation in activities of a criminal organization. This is a charge that has been rarely used, if ever, in the Yukon.

The drugs and illegally possessed firearms seized through this CRU investigation represent a significant disruption to drug trafficking in our Territory, especially in terms of the illicit trafficking of opioid substances. Our investigators have collected evidence indicating that this group supplied illicit drugs to the communities of Old Crow, Mayo, Dawson City and Whitehorse including the Whitehorse Correctional Centre.

Over the past five years in Yukon, trafficking offences relating to heroin, cocaine and other drugs have increased by 90%. We can identify two significant reasons for this increase. First, there has been in influx of criminal groups in the territory involved in drug trafficking. However, a second significant reason for this 90% increase in trafficking offences can be attributed to the increase in drug investigations conducted by the Yukon RCMP. The Yukon RCMP has received a report, completed by the Criminal Intelligence Service of British Columbia/Yukon Territory (CISBCYT) titled Organized Crime in Yukon: An Examination of Criminal Networks and the Associated Impact. This recent analysis of criminal activity in Yukon provides important information with respect to guiding future enforcement activities conducted by CRU, other specialized units, and general duty officers in detachments across the Yukon. The report will be made available shortly.

As part of the Whole of Government Response to the Substance Use Health Emergency, the Yukon RCMP continues its enforcement efforts targeting traffickers of illicit drugs in Yukon and the protection of Yukon's vulnerable population affected by the illicit drug trade.

Two of the people arrested related to this investigation have recently been released. Jennifer Duke, arrested on June 1, 2022, and Kiara Hagen, arrested on June 3, 2022, were both released on bail and with conditions. Further court appearances are pending.