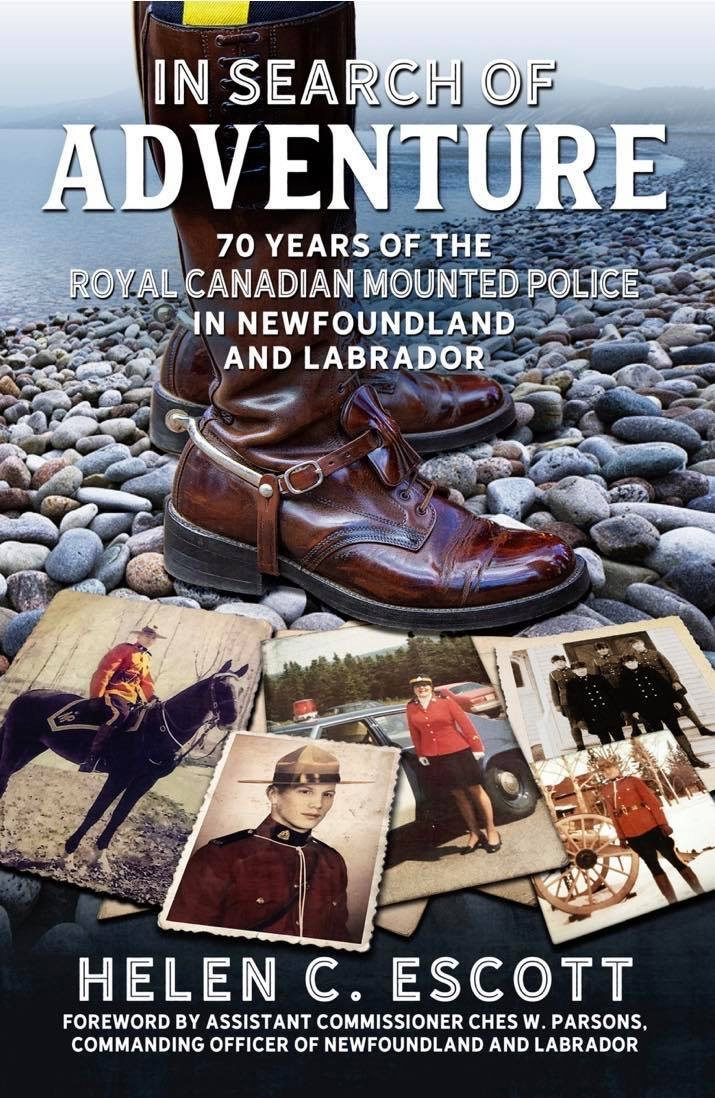 Seventy years ago on August 1, the presence of the Royal Canadian Mounted Police in Newfoundland and Labrador (RCMP NL) became official with an agreement between then RCMP Deputy Commissioner Gray and provincial Attorney General Leslie Roy Curtis. Today, the anniversary was marked with a book launch. In Search of Adventure – 70 Years of the RCMP in Newfoundland and Labrador was written by Helen C. Escott, a former RCMP civilian member, and published by Flanker Press. Assistant Commissioner Ches Parsons, RCMP Veterans Vice President George Noseworthy, Escott, Sergeant Major Doug Pack and veterans profiled in the book, among others, attended the launch today at RCMP Headquarters.

"I commend Ms. Escott for this historically significant work," said Assistant Commissioner Ches Parsons. "Deeds, figures, and raw history spill out from the pages onto the present. The stories are artful and poignant and, in all too many cases, heartbreaking. They open the mind and succour the soul, telling who we are, how our past explains the present and how this present will shape our future. They touch the heart as only the heart is touched by the cherished memories of those, here and gone, who serve with us now only in our memories."

The author was proud to take on the project of capturing the history and the compelling stories of the RCMP in Newfoundland and Labrador – from possible UFO encounters to moments of sheer terror, discovering innovative ways to connect with the communities they policed to investigating the murders of two of their own. The book also includes the personal stories from two constables who were in the middle of the Badger Riot on March 10, 1959 when 24-year old RNC Constable William Moss was fatally injured.

"It has indeed been an honour to capture the stories of the RCMP Veterans who had a front-row seat to history," said Ms. Escott. "These police officers lived by Peel's Principles of Law Enforcement. They worked toward our collective good with crime prevention and community trust and engagement, never being above the law and always believing the police are the public and the public are the police."

This historical collection will be available on August 1 in soft cover and ebook at stores throughout the province and online.

On March 22, 1949, nine RCMP officers arrived in Canada's newest province and opened a Divisional Headquarters on Kenna's Hill in St. John's. And, so began the presence of the RCMP in Newfoundland and Labrador, which incorporated the Newfoundland Rangers who provided law enforcement and other government services from 1935-1949. Escott interviewed Veterans and documented their stories, including three of the last living Newfoundland Rangers, the first female police officer to serve in this province and the first Mounties to arrive in 1949.

RCMP Veteran Staff Sergeant (retired) George Noseworthy, currently Vice President of the RCMP Veterans in this province, was one of the veterans featured in Escott's book.

"There is history captured in this book, including my own experience and that of many others, that makes for a fascinating read for everyone," said Staff Sergeant (retired) Noseworthy. "I was pleased to be a part of it and to have the project supported by the RCMP Veterans Association."