Podcasts have quickly become a popular way to communicate certain topics to a large-scale audience. The creation of the RCMP National Youth Services podcast series is anticipated to increase accessibility to our programs and engagement opportunities. Listeners can select and choose a topic or guest speaker depending on their particular interests and listen at their leisure. 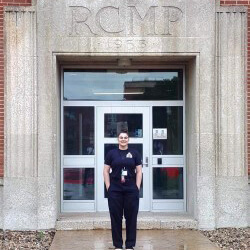 The first podcast for the RCMP National Youth Services team highlights Emily Dion and her life experiences. She discusses her life goals as well as the obstacles that have created challenges along the way. She discusses how she overcame those obstacles and where she is in her journey, as well as the positive impacts the National Youth Services has had on her life.

Emily has taken part in various RCMP initiatives and has been to Regina with National Youth Services twice. She is currently in school and hopes to become a police officer someday.