Trials and training: life at Depot for Troop 17 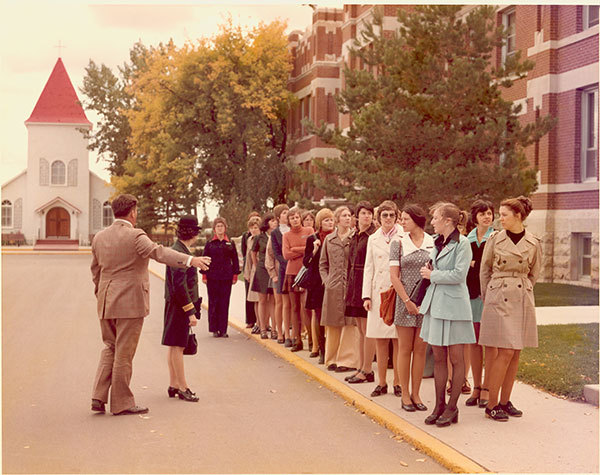 No one's sure who was more filled with trepidation when the first female RCMP recruits walked onto the grounds of the RCMP Academy, "Depot" Division – the women, or the men who had to train them.

"We were ready for them, sort of," laughs Al Nicholson, one of the Depot instructors when the women – collectively known as Troop 17 1974/75 – were sworn in September 16, 1974 and started training a week later.

Reflecting back to the first time he stood in front of the 32 women in a classroom, the former Mountie with about a year experience teaching recruits by that point says, "It was the first time I was nervous at Depot. I didn't want to say anything the wrong way."

"Depot" Division, officially opened in 1885, is a sprawling facility located in Regina, Sask. that clearly reflects the RCMP's paramilitary tradition. The newest cadets march in troop formation double-time from class to class, everyone is acknowledged with a "sir" or "ma'am," and at noon most days you can hear the drill sergeant's commands from Parade Square.

Walking onto "base" on that first day can be overwhelming for anyone. "The uniform, the marching, the drill, the 'Yes Sir, No Sir', it's a lot for anyone to adjust to regardless of gender," says Nicholson, now head of the RCMP Heritage Centre in Regina.

Donna Morse (nee Burns), then a 21-year-old from Calgary, Alta., describes the feeling she first had as a "scary awe."

"I really didn't know what I was getting myself into," she freely admits recently from her home near Vancouver, B.C. where she is now retired after 21 years with the RCMP and another 19 years with the B.C. government.

Historically, each 32-member troop of men lived together in a dorm much like an army barracks – along each wall, rows of beds made with precise corners and sheets tight enough to bounce a coin off of. When the women arrived, they were placed in two-person rooms based on the belief they needed more privacy. And there was a rush at the last minute to replace the dorm's urinals with toilets. 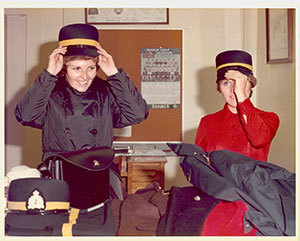 Then there was the uniform. "They were still putting the uniforms together when we first arrived," says Troop 17 member Bev Busson (nee MacDonald), who would rise through the ranks during her 33-year career to become the RCMP's first female commissioner.

"They didn't give us duty belts, there weren't even belt loops on the pants," she recalls. Instead, there was the now infamous purse that featured compartments for a firearm, ammunition and a set of handcuffs. Fortunately, practicality prevailed and the women were issued duty belts before their training was done.

The black pumps, pillbox caps and clingy blouses lasted much longer. "The uniform was awful," says Nicholson. "It was like they pulled it straight out of the 1940s."

But it wasn't until the early 1990s that the "female" uniform was dropped and all Mounties were issued the same kit and clothing. It took 18 years, but in 1992 women would finally don the iconic red serge, Stetson, high Browns and breeches for which the RCMP is internationally known.

Little was changed in the training for the women. Aside from cleaning up some of the language that is, Nicholson admits. In today's cadet training there are no differences, but at the start there was some "modification in the program designed to cater to our physical abilities," wrote Cst. Barb Woods (now Alexander) in The RCMP Quarterly in April 1975, just a month after she and 29 others from the original troop graduated.

When the women of Troop 17 first started drill training, the drill instructors were concerned that "wiggling" hips would interfere with the precise military steps. Turns out, the women were able to be just as precise as the men.

When the women of Troop 17 first started drill training, the drill instructors were concerned that "wiggling" hips would interfere with the precise military steps. Turns out, the women were able to be just as precise as the men.

The women did, however, have an extra challenge when it came to learning the precise movements and patterns for drill, according to Armstrong: "The Drill Staff took pains to teach us to march without a wiggle!"

In the classroom, however, there was no difference. For Karen Adams (nee Somers), there was one instructor who stood out because he was so intimidating on Day 1 and her favourite by graduation on Mar. 3, 1975. "He taught us that policing was something to take very seriously and that if you couldn't take it seriously at Depot, you had no place in the field," she explains.

"They all gave us a good dose of reality but I didn't think they treated us any differently than the men," she says from Edmonton where she is now retired after 28 years with the RCMP and another 11 teaching in the law enforcement program at MacEwan University.

There was one element, however, that was unique for Troop 17, something never experienced by any troop before or after – the news media. 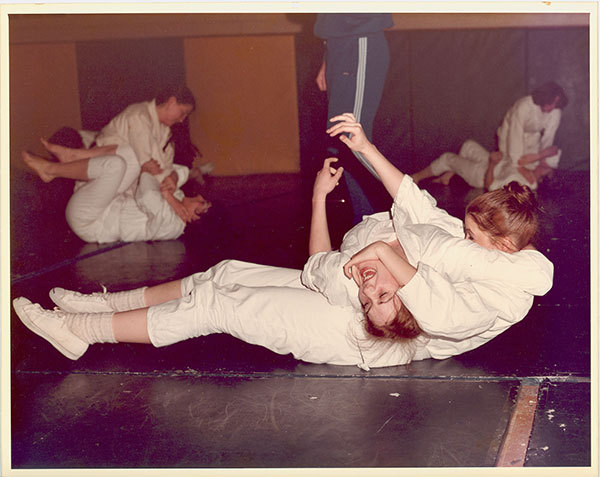 "You just wanted to be treated like everyone else and a news crew would descend on you in the middle of a defensive tactics class," laughs Busson. "Sure it was an intrusion but we tried to stay focused and get through the challenges of the day."

She and her troop mates definitely felt the pressure to prove they deserved to be there and as a result, the group got "really close, really fast." So close in fact that there have been Troop 17 reunions every five years since they first took their oaths.

The instructors and staff of the day also felt the pressure to make it work. "We were trying to catch up with the world," says Nicholson, noting that many other Canadian police services accepted female applicants decades earlier.

When looking back, Nicholson is proud to have been part of this important part of the RCMP's history. And you can hear the pride in his voice when he says he watched the "girls" progress through their careers.

"They worked really hard and they worked well as a team," he says. "They were just a really good troop."