This quarterly report has been prepared by management using an expenditure basis of accounting. The accompanying Statement of Authorities includes the RCMP's spending authorities granted by Parliament and those used by the department consistent with the Main Estimates for the 2019-20 fiscal year. This quarterly report has been prepared using a special purpose financial reporting framework designed to meet financial information needs with respect to the use of spending authorities.

For the period ending June 30, 2019, the RCMP had $3,540.3 million in total authorities available for use, as reflected in Annex A: Statement of Authorities. This amount includes the Main Estimates, transfer from RCMP Budget 2019 implementation Votes and $5.6 million related to the proceeds collected from the disposal of Crown assets, as displayed in Graph 1: Comparison of Total Budgetary Authorities below.

Total authorities have decreased by $16.5 million, when compared to the previous year, which includes a year-over-year decrease of $9.8 million in Vote 1 – Operating expenditures, a $38.1 million decrease in Vote 5 – Capital expenditures and a $1.4 million decrease in Budgetary statutory authorities. These decreases are partially offset by an increase of $32.8 million in Vote 10 – Grants and contribution. The overall decrease is primarily related to the net decrease of $113.8 million in the 2019-20 Main Estimates, a decrease of $9.5 million related to Budget 2018 item received through a transfer from TB Central Vote 40 and a minor decrease of $1.0 million of the proceeds collected from the disposal of Crown assets. Part of this decrease is offset by an increase of $107.8 million from RCMP Budget 2019 implementation Votes items. 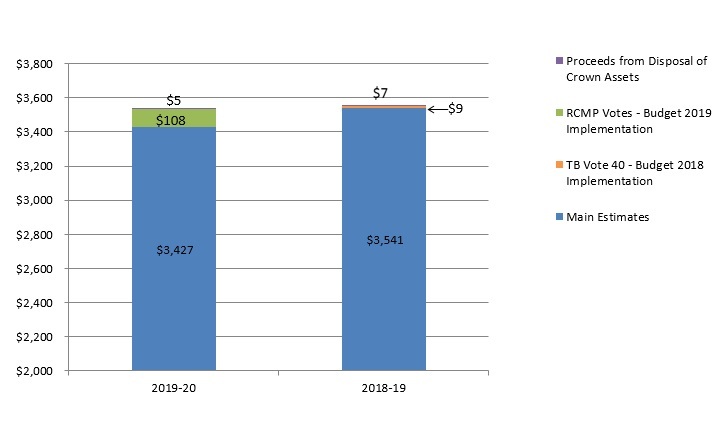 The decrease of $9.8 million in Net Operating authorities, reflected in Table 1: Authorities Available for Use, is primarily related to sunsetting of the funding for the 2018 G7 Summit in Charlevoix, Quebec ($126.9 million), a decrease in funding for a re-allocation of funds to Shared Services Canada to modernize and enhance the Government's digital services ($11.4 million), a net reduction of funding for the International Peacekeeping and Peace Operations ($5.1 million), as well as, some sunsetting of funding announced in prior years Budgets ($13.9 million). These decreases are partially offset by Budget 2019 initiatives such as funding for strengthening the RCMP frontlines operations ($78.4 million), Enhancing Integrity of Canada's Borders and Asylum System ($12.4 million), Delivering Better Service for Air Travel ($2.9 million) and Protecting Canada's National Security ($0.8 million). They are also offset by funding for ensuring security and prosperity in the Digital age ($14.0 million), funding for additional investigative resources to counter terrorism ($6.4 million), funding to increase forensic toxicology capacity in support of the new drug-impaired driving regime ($5.6 million), funding to take action against gun & gang violence ($5.3 million), as well as, funding increases of initiatives announced in prior years Budgets ($20.9 million).

Capital authorities have decreased by $38.1 million when compared to the first quarter of 2018-19. The decrease is due to projects nearing completion including the new RCMP National Forensic Laboratory Services facilities ($23.1 million), a number of federal infrastructure assets ($20.0 million) and the construction of a new National Operation Center ($8.6 million). These decreases are partially offset by an increase in funding for ensuring security and prosperity in the Digital age ($11.2 million) and in funding to increase forensic toxicology capacity in support of the new drug-impaired driving regime ($4.3 million).

The increase of $32.8 million in Grants and contributions authorities is related to increases in the grant to compensate members of the RCMP for injuries received in the performance of their duties. The increase is as a result of a higher number of Members receiving disability pension awards, and the reassessment and indexation of disability pension benefits.

The net decrease in budgetary statutory authorities of $1.4 million is primarily related to decrease in the rate used to calculate Employee Benefit Plan costs ($8.7 million). There are also decreases related to funding for the Pension Continuation Act (PCA) statutory grant ($1.5 million) as there are fewer recipients and smaller proceeds collected from the disposal of Crown assets ($1.0 million). These decreases are offset by additional Employee Benefit Plan funding received primarily related to initiatives announced in Budget 2019 ($9.8 million).

The RCMP has spent approximately 26% of its authorities at the end of the first quarter, compared with 22% in the previous year, as demonstrated in Graph 2: Comparison of Total Budgetary Authorities and Net Expenditures below, when vote netted revenue is taken into consideration.

Graph 2: Comparison of Total Budgetary Authorities and Net Expenditures as of June 30, 2018 and June 30, 2019 (in millions of dollars and percentage) 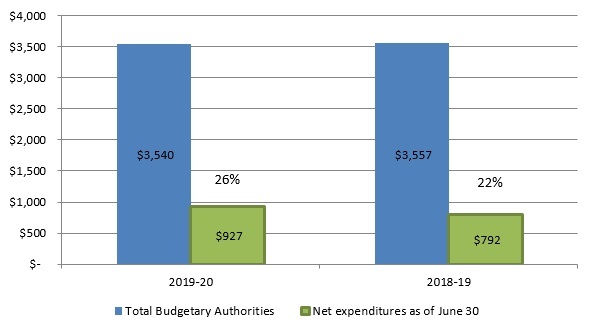 Table 2: Net Expenditures by standard object at the end of the first quarter 2019-20 were 17% or $135.0 million higher than the previous year. This variance is primarily the result of a decrease in vote netted revenue. Additionally, there was a reduction in gross expenditures of $2.9 million (or 1%) from the previous year. A detailed review by standard object emphasizes some significant variances which are described below.

Information increased by $0.1 million (or 39%) over the same period last year. This increase is related primarily to the timing of invoices and expenditures incurred earlier in the fiscal year compared to the previous year.

2.2.3 Variance by professional and special services

Professional and Special Services have increased by $14.9 million (or 16%) when compared to 2019-20. The increase is primarily due to legal services costs and radio systems costs, both of which can be attributed to a difference in the timing of the expenditures when compared to the previous fiscal year. In addition, there were incremental Health Costs for regular members and pensioners. These increases were partially offset by a decrease in expenditures related to the G7 Summit. The remaining increases can be attributed to invoicing timing differences.

2.2.5 Variance by purchased repair and maintenance

Purchased Repair and Maintenance increased by $2.6 million (or 19%) related to higher renovation costs of buildings within the Contract Policing program area.

2.2.6 Variance by acquisition of land, buildings and works

Acquisitions of Land, Buildings and Works expenditures have decreased by $1.7 million (or 17%) when compared to 2018-19. This decrease primarily relates to a reduction in expenditures for the construction of the new RCMP National Forensic Laboratory Services facilities.

2.2.7 Variance by acquisition of machinery and equipment

Acquisition of machinery and equipment decreased by $18.9 million (or 39%) in comparison to 2018-19 which is primarily due to expenditures for security costs related to the G7 Summit held in 2018-19. The remaining variance is largely as a result of timing differences in the acquisition of annual inventories, information management and information technology invoices, and investigational aids.

2.2.8 Variance by other subsidies and payments

The Departmental QFR reflects the results of the current fiscal period in relation to the Main Estimates, for which full supply was released on June 21, 2019.

The RCMP is funded through annual appropriations and are, therefore, impacted by any changes in funding approved through Parliament. In addition, it receives a significant portion of funding through vote netted revenue (VNR) from the provision of policing services to provinces, territories, municipalities and first nations communities, as well as from cost sharing agreements with provinces and territories for the provision of DNA analysis by the RCMP. The RCMP also receives VNR authorities to bill Parliamentary Protective Service (PPS) for the provision of security services throughout the Parliamentary precinct and the grounds of Parliament Hill.

In comparison to the first quarter of 2018-19, the RCMP has the conclusion of security measures in support of Canada Hosting the G7 Summit. Due to the nature, and overall magnitude of the G7 Summit, the RCMP's expenditures in many Standard Objects increased in 2018-19, the RCMP will see significant reductions in many of these areas throughout 2019-20.

There has been no significant change in relation to personnel in the first quarter of 2019-20.

There has been no significant change in relation to programs in the first quarter of 2019-20.

Annex A: Statement of Authorities (unaudited)