This Quarterly Financial Report (QFR) has been prepared by management as required by section 65.1 of the Financial Administration Act and in the form and manner prescribed by the Treasury Board. The report should be read in conjunction with the Main Estimates for 2016-17, as well as Budget 2016. The quarterly report has not been subject to an external audit or review.

Further information on the mandate, roles, responsibilities and programs of the RCMP can be found in the Part II of the Estimates.

This quarterly report has been prepared by management using an expenditure basis of accounting. The accompanying Statement of Authorities includes the RCMP's spending authorities granted by Parliament and those used by the department consistent with the Main Estimates, Supplementary Estimates (B), the Operating Budget Carry Forward and Capital Budget Carry Forward for the 2016-17 fiscal year. This quarterly report has been prepared using a special purpose financial reporting framework designed to meet financial information needs with respect to the use of spending authorities.

The authority of Parliament is required before moneys can be spent by the Government. Approvals are given in the form of annually approved limits through appropriation acts or through legislation in the form of statutory spending authority for specific purposes.

The RCMP uses the full accrual method of accounting to prepare and present its annual departmental financial statements that are part of the departmental performance reporting process. However, the spending authorities voted by Parliament remain on a cash expenditure basis.

For the period ending December 31, 2016, the RCMP had $3,024.8 million in total authorities available for use, as reflected in Annex A: Statement of Authorities. This amount includes the Main Estimates, Supplementary Estimates (B), TB Vote 25 – Operating Budget Carry Forward, TB Vote 30 – Paylist Requirements, TB Vote 33 – Capital Budget Carry Forward, in-year statutory adjustments and $9.9 million related to the proceeds collected from the disposal of Crown assets, as displayed in Graph 1: Comparison of Total Budgetary Authorities below. 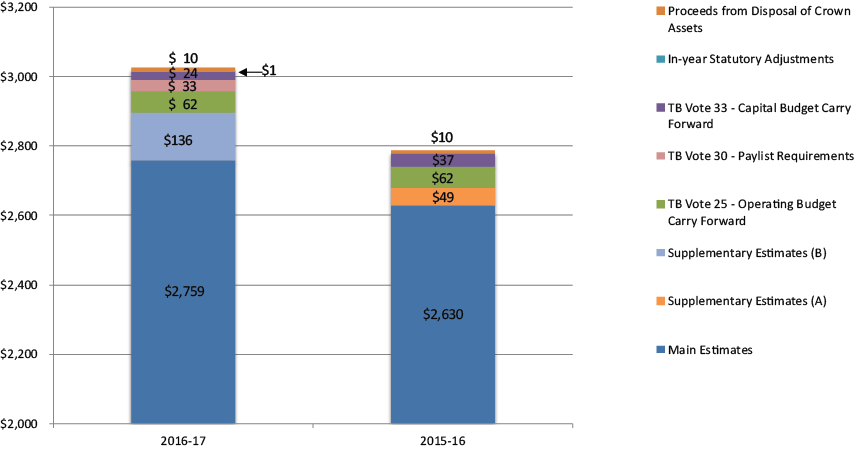 The increase of $27.7 million in Vote 10 – Grants and contributions is related to a year-over-year increase in the 2016-17 Main Estimates and the 2016-17 Supplementary Estimates (B). It is mainly attributable to the increase in projected costs of the grant to compensate members of the RCMP for injuries received in the performance of their duties, as a result of increases in the number of Members receiving disability pension awards and the annual increases due to the indexation of disability pension benefits.

The RCMP has spent approximately 69% of its authorities at the end of the third quarter, compared with 74% in the previous year, as demonstrated in Graph 2: Comparison of Total Budgetary Authorities and Net Expenditures below, when vote netted revenue is taken into consideration.

The overall increase of expenditures in 2016-17 compared to 2015-16 is partially offset by the increase in revenue collection resulting a net increase of $26.6 million (or 1%). A detailed review by standard object emphasizes some significant variances which are described below. 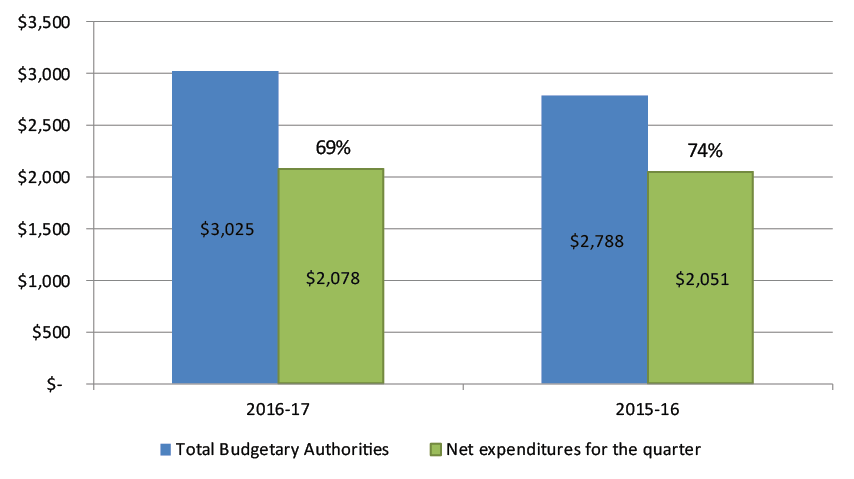 Vote netted revenue collected in 2016-17 is higher by $52.0 million (or 4%) over the same period last year, which is attributed to an increase of $54.6 million in Contract Policing Services. The increased revenue collection is related to Alberta First Responder Radio Communication System (AFRRCS) as well as overall growth in the program.

Information related costs have decreased by $1.0 million (or 40%) as compared to the third quarter expenditures in 2015-16. The decrease is primarily due to costs in regards to the Government advertising initiative for which a one-year funding of $6.0 million was approved in 2015-16.

2.2.3 Variance by Professional and Special Services

Professional and Special Services have increased by $45.1 million (or 17%) when compared to 2015-16. The increase is largely due to an increase of $24.1 million in relation to the first annual Systems Operating Lease and Maintenance payment that was made to the Province of Alberta for the Alberta First Responder Radio Communication System (AFRRCS). Treasury Board provided ongoing funding to support this project as part of the 2015-16 Contract Policing TB Submission. Annual payments of $24.1M are to be paid to the Province of Alberta around October and November moving forward and the RCMP will in turn be recovering approximately 70% of these costs from the Province each year as part of the third quarter invoicing process. The increase is also due to an increase of $12.7M in Real Property Management to cover the costs for the WorkPlace 2.0 project. Public Services and Procurement Canada (PSPC) expected a sizeable reduction in the RCMP's space envelope as a result of both Deficit Reduction Action Plan (DRAP) and Workplace 2.0 Initiative. The majority of the anticipated reduction in the RCMP's space requirements has not been achievable. As such, the RCMP is now required to pay for that space. In addition, health costs for regular members and pensioners have gone up by $3.7 million which is due to standard growth and timing of payments. The balance of the increase is spread across the department.

2.2.4 Variance by Repair and Maintenance

Repair and Maintenance costs have increased by $7.0 million representing a year-over-year increase of 15%. Of this, $5.3 million is related to Depot Works and Betterment and other Federal Infrastructure Initiative projects in "Depot" Division. The increase is also attributed to an increase of $1.5 million in Contract Policing Program which is primarily related to the Real Property Life Cycle costs in the detachments.

2.2.5 Variance by Acquisition of Land, Buildings, and Works

Acquisitions of Land, Buildings and Works expenditures have increased by $20.6 million (or 53%) when compared to 2015-16. An increase of $10.2 million is related to the Federal Infrastructure Program and the Federal Infrastructure Initiative projects; and an increase of $10.0 million is due to timing issues associated with the construction costs in the provincial and territorial detachments.

2.2.6 Variance by Other Subsidies and Payments

Other subsidies and payments expenditures are $16.9 million (or 30%) lower in 2016-17 as compared to 2015-16. It is primarily due to a decrease of $12.6 million in 2016-17 related to the timing of items being cleared from suspense accounts and a decrease of $6.5 million as a result of a legal settlement paid out in 2015-16. These decreases are partially offset by increases spread across the organization.

The RCMP is funded through annual appropriations and are, therefore, impacted by any changes in funding approved through Parliament. In addition, it receives a significant portion of funding through vote netted revenue (VNR) from the provision of policing services to provinces, territories, municipalities and first nations communities, as well as from cost sharing agreements with provinces and territories for the provision of DNA analysis by the RCMP. Subsequent to the creation of the Parliamentary Protective Services (PPS) in 2015-16, the RCMP now also receives significant Vote Netted Revenue authorities related to PPS. PPS is a new entity responsible for the full protection on Parliament Hill and the VNR authority allows the RCMP to bill PPS for security services on Parliament Hill.

The RCMP received $57 million from a TB submission through the 2016-17 Supplementary Estimates (B) in the third quarter for the settlement of the Merlo and Davidson proposed class action lawsuits against the RCMP. This Submission approved $121.5 million over three fiscal year, 2016-17 to 2018-19; of this, $100 million is for compensation awards that will be paid to successful claimants and the remaining $21.5 million is for class counsel legal fees and disbursements, and to secure the services of an assessor of claims. On October 6, 2016, the RCMP announced in a media conference that a settlement agreement had been reached between the RCMP and the plaintiffs in the Merlo and Davidson lawsuits filed on behalf of female current and former regular members, civilian members and public service employees. This settlement, which is subject to approval by the Federal Court, sets out an independent claims process and compensation amounts for women who experienced gender and sexual orientation-based discrimination, bullying and harassment in the RCMP between September 16, 1974 and the date the agreement receives court approval. It is now anticipated that the claims process will commence in the new fiscal year; as a result, most of the $57 million in funding is expected to be lapsed at year-end and carried forward to next fiscal year.

On January 16, 2015, the Supreme Court of Canada determined in Mounted Police Association of Ontario (MPAO) v. Attorney General of Canada, that the exclusion of RCMP members from the definition of "employee" in the Public Service Labour Relations Act (PSLRA) and the imposition of the RCMP Staff Relations Representative Program were unconstitutional. In response, Bill C-7, An Act to amend the Public Service Labour Relations Act, the Public Service Labour Relations and Employment Board Act and other Acts, was introduced in the House of Commons on March 9, 2016. On May 30, 2016, the Bill was adopted by the House and sent to the Senate for consideration. On June 21, 2016, the Senate passed the Bill with amendments. The Government is currently reviewing the Senate amendments and is preparing a response.

Given the increasing demands on RCMP resources, particularly on National Security files, the RCMP is facing significant resourcing challenges. The increased concerns around terrorism and extremism, cybercrime, changing demographics, population growth and rapid technological advancements might create unforeseen operational requirements and increase the existing organizational costs. In recent years, the RCMP's reference levels have been constrained by government-wide spending reduction exercises which have resulted in significant financial pressures. To address the current financial challenges, a Resourcing Review was launched in August 2016 following award of the consulting contract through a competitive process to KPMG. The purpose of the Review is to assess the financial integrity issues faced by the RCMP, and serve as the basis for a longer term strategic recommendations to the Minister of Public Safety and Emergency Preparedness. A final report is expected to be completed by the end of this fiscal year.

There has been no significant change in relation to operations in the third quarter of 2016-17.

The Chief Financial and Administrative Officer (CFAO), Deputy Commissioner Alain Duplantie retired from the RCMP in April 2016, after 36 years of service. Dennis Watters, CPA, CA, CFE has been serving as Acting CFAO in the interim. Further information will be made available once an appointment has been made.

There has been no significant change in relation to programs in the third quarter of 2016-17.