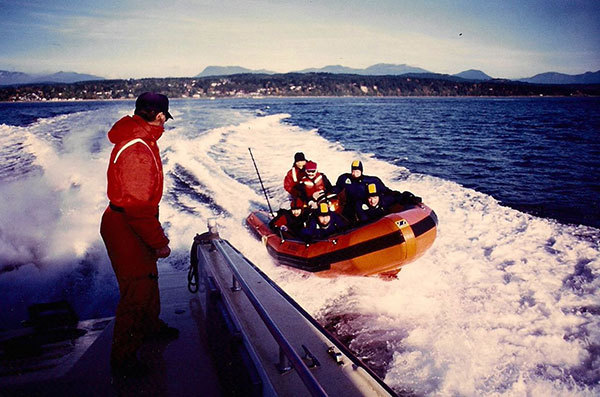 Taking the plunge into uncharted territory

In a career she was dreaming about as a young child, Insp. Ruth Roy has compiled an impressive resume since taking the plunge with the Underwater Recovery Team (URT) in 1991. As the first female URT member in British Columbia, it was a challenging course to navigate.

"Having joined the force in 1981 when women were still a bit of a novelty, I quickly learned that police work is more about being able to deal with people than it is about being physically tough," says Roy.

In her first six months on the job, responding alone to a call to remove a large, intoxicated man from a shelter, Roy learned that kindness, generosity, and a sense of humour can go a long way. Cracking a joke to defuse the situation, she explained to him that he had to leave and offered a trip to the cells to sleep it off, which he sheepishly accepted.

Roy's approach speaks to her determination and resolve, which served her well in the years that followed. Marrying a fellow member at a time when the Force wasn't supportive, Roy opted to leave the RCMP and join Ports Canada Police (PCP). Already being an avid diver, the police dive unit was a natural choice. In 1988, Ports Canada sent her for underwater recovery training with the RCMP, whose dive team was still "one of the last bastions of the old boys club," recalls Roy.

"I was watched closely," adds Roy, the first woman to ever participate in the training. "But I was very comfortable in the water and excelled at all the tasks." After three weeks of intensive training, this former competitive swimmer succeeded and spent the next three years diving with the Ports Canada team and participating in training and practice dives with the RCMP team.

Rejoining the force in 1991, Roy was posted to "E" Division and started participating in RCMP practice dives again.

By that time, precedence had been set for women to join URT. Cpl. Ann Noel was the first in February 1989, when she earned a position on the "B" Division part-time team in Newfoundland and Labrador.

For Roy, the stars aligned when a permanent position came up on the URT team in 1991. Although supportive during practice dives, initially some in management weren't onboard with her joining the team in a permanent role.

"When it came time to have me on the team, management started putting up barriers," recalls Roy. "First it was the lack of changing facilities, then a woman's 'lack of strength,' and then some of the fellows were uncomfortable with a woman partner."

Noel can relate to the discussion about changing facilities. "The team changed in a cube van so there was a concern about where I was going to change," she says noting that it was easy to fix. The team members just changed into swimsuits before reporting to a dive. "We just knew we had a job to do and we did it."

Despite the barriers Roy faced, her history with the team prevailed. It was a photo from one of her many practice dives of her with a large bag of gear and two 25 lb. weight belts over her shoulders, while being passed an air tank that convinced them that strength was clearly not an issue. Any other concerns were put to rest when one of her dive mates told a story about a practice dive in the Skookumchuck Narrows, a strip of rapids in Pender Harbour, B.C.

"My partner and I were holding hands with arms outstretched, gliding quickly about 10 feet from the ocean floor, with a collage of reds, oranges, purples and greens passing beneath us… It was magical, and probably the closest thing to flying that I will ever do," Roy vividly remembers.

"We finally came to a stop and checked our gauges. We were at 80 feet and my partner was running low on air, so we started heading to the surface. We pushed off and swam in a big circle, then suddenly it was getting darker rather than lighter and we were descending again. We realized we were in a whirlpool, and his suit didn't have sufficient air in it to counteract the downward pull. At the same time, he signaled that he was out of air. I took my octopus (spare mouthpiece) and stuffed it in his mouth, filled my buoyancy compensator to the max and basically pulled him to the surface."

Roy's skill level and competence were never questioned again, and she proudly served on URT for eight years. Continuing on to many formidable roles following URT, including her current post on the Prime Minister's Protection Detail, Roy was also one of the first female aide-de-camps (confidential assistant) in 2000 to then-Lieutenant Governor of Nova Scotia, Myra Ava Freeman, who specifically requested Roy. Normally a position for a commissioned officer, Roy's appointment while a corporal paved the way for several other female non-commissioned officers to later take on the esteemed role.

With so many accomplishments under her belt, including setting up a training program for gender-based violence in Haiti and spearheading an international research project on police leadership and what men and women view as barriers to promotion, a true career highlight was receiving the 2013 Woman Law Enforcement Executive of the Year Award.

"It's funny how you just do what you think is right, and when you look back you can reflect and see the impact you left, that is rewarding," comments Roy. When asked what words of wisdom she would impart to current or future women of the RCMP – "Be yourself and as you climb the corporate ladder, reach back and pull at least two other women with you!"