About the RCMP in Newfoundland and Labrador 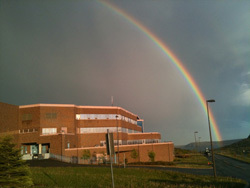 In Newfoundland and Labrador, the RCMP has three Districts:

Providing safe highways to the citizens of Newfoundland and Labrador is a priority of not only the "B" Division Traffic Services Unit, but for every RCMP Officer posted to this province. The "Mission" of our Traffic Services Program is to always work to Improve Public Safety on our Highways, and our "Vision" is to have the safest roads in the world. We will achieve these results by focusing our educational and enforcement efforts on high risk driving activities which lead to death and injuries, such as the non-use of occupant restraints, driving while impaired, intersection violations, and aggressive driving. The "B" Division Traffic Services Unit has worked together with RCMP officers from across the Province to tackle this problem and our efforts are showing positive results with a steady reduction in the numbers of Newfoundlanders and Labradorians who are being killed and seriously injured annually on our highways.

Family violence is an ongoing provincial strategic priority for the Royal Canadian Mounted Police in Newfoundland and Labrador. It is defined as physical, sexual, emotional and/or psychological abuse of a partner, child, elderly person, or person in a dating relationship.

Whether it is happening to a youth being victimized through the internet, a spousal assault, child abuse, teen suicides or elder abuse, the response is a priority to all RCMP members in this province.

Each of the RCMP's eleven districts throughout Newfoundland and Labrador focus on their priority family violence issue and implement strategies to prevent this crime. These district plans have already reduced assault complaints in several communities, increased prosecutions of domestic assaults, increased patrols of trouble areas and initiated Emergency Protection Orders.

The district plans have enhanced awareness in schools and with partners through senior abuse awareness, bullying and dating violence presentations. Some of our family violence initiatives include suicide prevention programs for high-risk Labrador communities and suicide prevention training for Labrador members. This has resulted in reduced suicide rates in Labrador. RCMP members also work closely with the Voice Against Violence committees throughout the province ( www.bpvav.com ).

The RCMP has also implemented Amber Alert. It is a voluntary, cooperative program that sends an emergency alert to the public when a child has been abducted and it is believed that his/her life is in grave danger. It can only be activated by a member of the RCMP/RNC who is an authorized user and is only used for serious child abduction cases.

For more information on family violence and intimate partner abuse contact the RCMP in Newfoundland and Labrador at 709-772-5400.

The Royal Canadian Mounted Police was founded in 1873. It was first known as the North West Mounted Police and it was modeled after the Royal Irish Constabulary. The first Newfoundlander to join was Constable Earnest W. Peyton in 1888. He was the son of a prominent family from Twillingate and was believed to be 21 at the time.

The RCMP took over the duties of the former Newfoundland Rangers and also members of the Royal Newfoundland Constabulary serving outside St. John's. At the time, 55 Newfoundland Rangers and 22 Constabulary members were accepted into the RCMP. The Force was given the responsibility of policing all of Newfoundland and Labrador with the exception of the capital city. Because of the growth in the establishment of the RCMP, in 1954 the force opened up sub-division headquarters in Corner Brook and St. John's. As the force continued to expand, sub-divisions were then added in Gander and Labrador.

Times changed, and the RCMP was quick to change with them. In1974, women were able to join the RCMP for the first time. Three of the first group of women accepted into the Force, were Newfoundlanders.

Policing has changed a lot since 1950. Today, the RCMP in Newfoundland and Labrador uses leading-edge technology and has learned to adapt to meet the changing needs of our times.

The RCMP has had two members killed in this province. 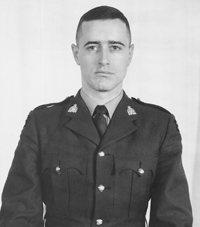 Cst. Terry Hoey was 21 years old when he was serving in Botwood, November 6, 1958. Cst. Hoey, along with two other RCMP members, responded to a domestic dispute between the owner of a local restaurant and his son. After getting no response from inside the living quarters of the restaurant and fearing for the son's life, the three members entered a side window and knocked on the living room door. They received no answer and found the door had been heavily barricaded. They called out to the owner and asked him to open the door. Immediately a shotgun blast ripped through the wood of the closed door striking Cst. Hoey in the chest. He died at the scene. A great part of his family's sorrow was in knowing that Terry had wanted to be a policeman all his life and that wish had led him to his death. 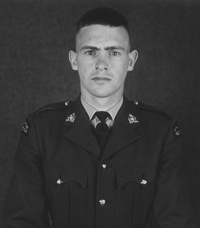 Cst Robert Amey was 24 years old when he was killed December 17, 1964 in Whitbourne. Four men broke out of Her Majesty's Penitentiary in St. John's. They stole a car and headed west along the Trans-Canada Highway. Near Whitbourne, they ran through an RCMP roadblock that had been set up by Csts. David Keith and Robert Amey. A chase ensued, and the four fugitives soon abandoned their car and ran for cover. They were discovered hiding in Whitbourne. Even though they were cornered, they refused to surrender. Amey went to the car radio and called for help. When Amey was in the cruiser, the four rushed Cst. Keith and after beating him severely, took away his service revolver. When Amey came running back, he could see that Keith was down and one of the fugitives was armed. Amey attempted to hold the prisoners at gun point but the fugitive fired three shots, one of which hit Amey in the chest, killing him instantly. Using Amey's gun, Cst. Keith was able to arrest the all four fugitives.