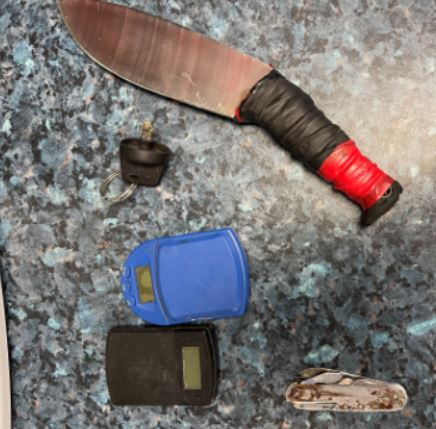 On January 8, 2022, at approximately 12:00 pm, Ste. Rose du Lac RCMP officers were conducting a patrol on the Ebb & Flow First Nation when they pulled up along side a young male walking along the road who was not dressed appropriately for the extremely cold temperatures.

In speaking with the 13-year-old youth from Vogar, Manitoba, the officers confirmed his identity and determined that he was on several court imposed conditions that included not being in the community.

The youth was placed under arrest and upon his search, officers located a large knife in his front waistband, a smaller knife in his pocket and two digital scales.

The accused was transported to the Ste. Rose du Lac RCMP detachment where he was later remanded into custody on charges including Possession of a Weapon, Carrying a Concealed Weapon and Failing to Comply with a Release Order.