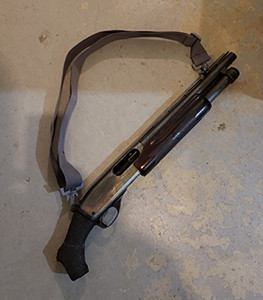 On September 15, 2022, at approximately 5:05 pm, Spruce Plains (Neepawa) RCMP responded to a report of a suspicious male and female walking around the community of Gladstone.

Officers conducted a patrol in the community and located the male walking along Regent Street. The officer approached the suspect and when he was asked for his identification, the suspect dropped his backpack and coat and ran off with the officer in pursuit. The foot pursuit continued down several streets and behind several homes before the suspect surrendered without incident to the pursuing officer in the parking lot of a nearby apartment complex.

After the arrest of the suspect, his jacket and backpack were seized and when the officer picked up the jacket, a loaded sawed-off shotgun was located within it.

A further investigation into the activities of the suspects led to the recovery of a stolen pickup truck out of Virden as well as a stolen motorcycle from Landmark.

Sean Paul Connors, 41, of Brandon, was remanded into custody on numerous firearm-related charges as well as for the Possession of Property Obtained by Crime, Possession of a Controlled Drug and Resisting Arrest.

Officers later located the 21-year-old female, from Brandon, who was arrested and later released for court scheduled November 22, 2022, in Minnedosa.