RCMP seize six firearms, including several that were loaded as well as drugs and weapons; five individuals arrested 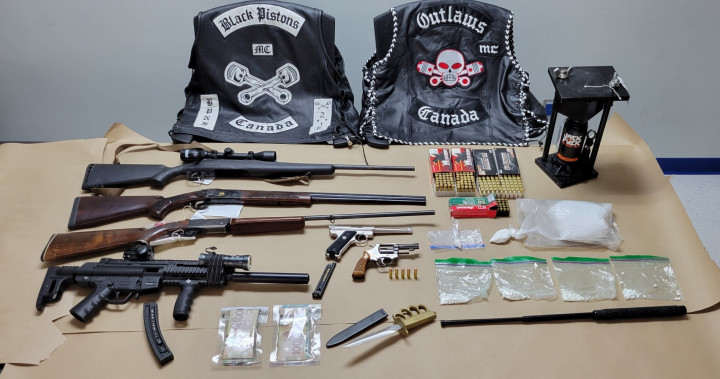 The New Brunswick RCMP has seized six firearms, including several that were loaded and unsecured, as well as drugs and weapons as part of a firearm investigation in Penniac, N.B.

On April 21, 2022, police executed a search warrant at a home on Route 628 in Penniac. During the search, police seized two loaded and unsecured handguns, including one that is prohibited, as well as four other unsecured firearms, including two that were loaded. Police also seized what is believed to be cocaine, fentanyl pills, an unknown substance believed to be a cutting agent, ammunition, money, drug-trafficking paraphernalia, two weapons including one that is prohibited, and eight outlaw motorcycle club vests.

Two men and three women were arrested at the scene without incident.

Wade Anthony Phillips, 41, from Penniac, and Andrew Jim Roberts, 38, from Cape Breton N.S., appeared in Fredericton Provincial Court by way of tele-remand on April 21. They were each charged with possession of a firearm while prohibited and were remanded into custody. They returned to court on April 25 for a bail hearing and were each charged with the following additional offences:

The investigation was conducted by the Provincial Crime Reduction Unit, which includes police officers from the New Brunswick RCMP and Fredericton Police Force. Members of the Emergency Response Team, Fredericton Police Force, Police Dog Services, New Brunswick Criminal Intelligence Services and the National Weapons Enforcement Support Team assisted. These efforts focus on disrupting and dismantling the trafficking of illegal drugs in our province, targeting those causing the most harm in our communities.