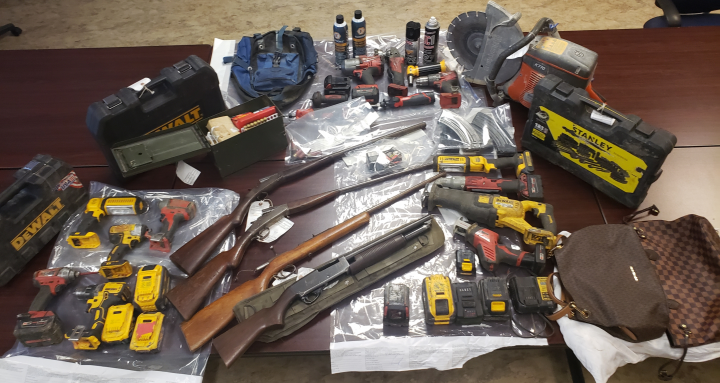 The Western Valley Region RCMP has recovered stolen vehicles and tools, and seized four firearms as well as ammunition following a search warrant in Centreville, N.B.

On May 9, 2022, police received a report of possible stolen items outside a home on Central Street. Once on scene, police seized all-terrain vehicles (ATV) and dirt bikes. A search warrant was executed later that day at the residence. During the search, police seized various types of tools including power tools, as well as four firearms including three that are prohibited and one that was loaded, as well as ammunition.

A 26-year-old man who was considered a person of interest in the investigation was being held in police custody on an unrelated matter prior to the execution of the search warrant.

Isaak Tedford Thomas, 26, appeared in Woodstock Provincial Court on May 11 and was charged with:

Isaak Tedford Thomas was also charged with six other offences for an unrelated matter. He was remanded into custody and will be returning to court on May 18, at 9:30 a.m.

Many of the items have already been returned to their rightful owners while police continue their investigation.

The public plays an important role in preventing thefts and is encouraged to report any suspicious activity to their local police. Information can also be provided anonymously through Crime Stoppers by calling 1-800-222-TIPS (8477), by downloading the secure P3 Mobile App, or by Secure Web Tips at www.crimenb.ca