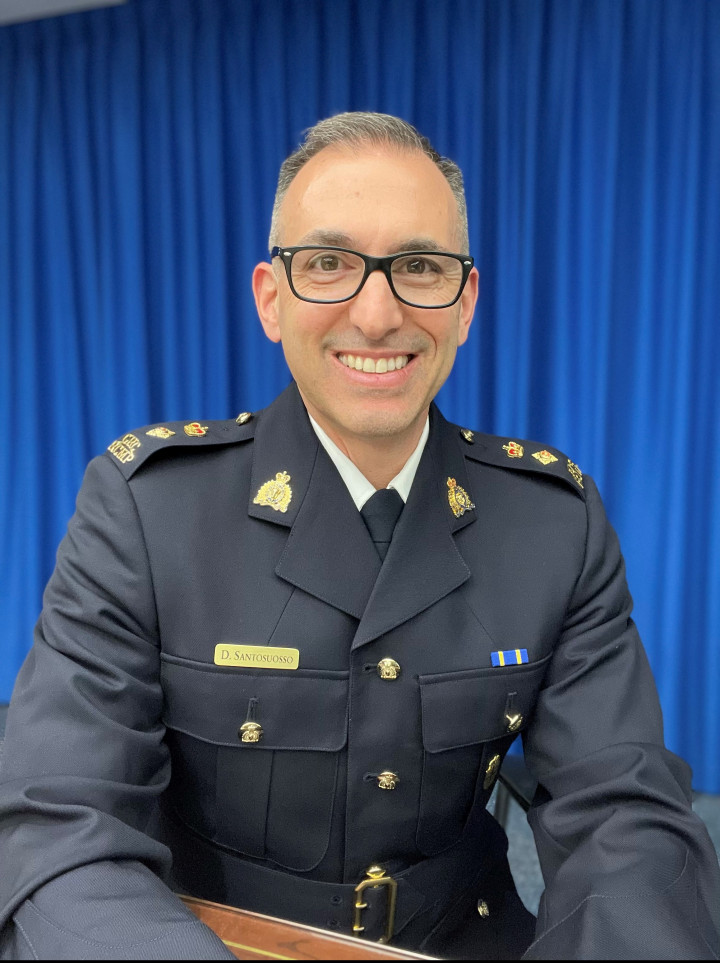 Superintendent Derek Santosuosso has been named as the new Commanding Officer of the PEI RCMP, with a promotion to the rank of Chief Superintendent. A 25-year veteran of the force, he has served across the country, most recently as Superintendent in charge of the Operational Support Services Branch in Newfoundland and Labrador.

"Being selected as the next Commanding Officer for RCMP Prince Edward Island is a tremendous honour," says Santosuosso. "I am excited and looking forward to beginning my tenure there, and joining the team protecting public safety in the province. I've had many wonderful opportunities during my RCMP career and fell in love with Atlantic Canada when I moved here in 2017. I feel very fortunate to be able to continue my career here."

Santosuosso grew up in London, Ontario, and holds a Bachelor of Arts honours degree in history from the Royal Military College of Canada. He was a member of the Canadian Forces from 1989 to 1997, leaving at the rank of Captain to join the RCMP. He served in General Duty in Saskatchewan and British Colombia, before joining the North District Major Crime Unit in Prince George, and later the Integrated Homicide Investigation Team (IHIT) in the Lower Mainland, the Chilliwack Serious Crimes Unit, and the BC RCMP's Major Crimes Section – Special Projects Unit.

In 2017, he was promoted to Officer in Charge of the Combined Forces Special Enforcement Unit – Newfoundland and Labrador (CFSEU-NL), investigating organized crime and internet child exploitation throughout the province. In 2018, he served as the Officer in Charge of the B Division Federal Serious and Organized Crime Unit, before leading the RCMP NL Operational Support Services Branch.

Santosuosso has also instructed at the Canadian Police College on both the Major Crime Investigative Techniques, and the Major Case Management Team Commanders Courses.

"I'm pleased to welcome Superintendent Derek Santosuosso to Prince Edward Island as the new Commanding Officer of RCMP's L Division. He will undoubtedly play a critical role with municipal chiefs in upholding the safety and security of Island residents and visitors to our province," said Bloyce Thompson, Minister of Justice and Public Safety, and Attorney General of Prince Edward Island. "I look forward to working with him to ensure our Island continues to be one of the best places to live, work, and raise a family."