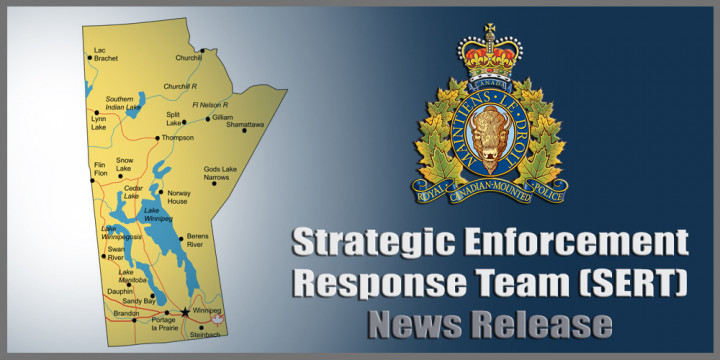 The incidences of violent crime in some rural communities in Manitoba is escalating. The Manitoba RCMP recognizes that these elevated violent crime rates in certain communities are often driven by street gangs and prolific offenders.

Increasingly, these prolific offenders and street gang members are using a variety of weapons, including firearms, to carry-out their intimidation and violent crimes. This heightens the risk and threatens the safety of all community residents.

To address this systematic rise in violent crime in some rural communities, the Manitoba RCMP has created a Strategic Enforcement Response Team (SERT). SERT operates in two distinctive phases:

The first phase relies heavily on the front-line officers who collect and enter critical pieces of information on crime and offenders within their areas into the RCMP's police records database.

This information is then examined by RCMP Strategic and Criminal Intelligence Analysts who look for patterns in a specific community that is seeing a spike in violent crime. The analysts also review the offenders, their potential gang affiliations and any ties they may have to provincial and inter-provincial criminal networks.

This information is then passed to officers within Major Crime Services who collect additional intelligence directly from the community through a variety of police investigative techniques. Search warrants are sought during this phase.

The first SERT deployment was in Moose Lake, Manitoba, from July 20 to July 22, 2022 and additional deployments are in the intelligence gathering phase. The locations cannot be disclosed to protect the integrity of the ongoing investigations.

"The creation of SERT is in direct response to the concerning upwards trend of violent crime in certain communities and the increased use of violence by prolific offenders and street gangs. By using an intelligence-led approach that uses the skills of every facet of our organization, we believe SERT will have a real and immediate impact on community safety."

"Our government supports the RCMP in the creation and deployment of this intelligence-led response team. Pursuing these gang members and violent offenders with targeted resources will help to address the violent criminal activity harming many Manitoban communities."

From July 20 to July 22, 2022, the Manitoba RCMP deployed its first Strategic Enforcement Response Team (SERT) to the community of Moose Lake.

Moose Lake, a community of approximately 1,200 residents, was selected due to a recent spike in violent crime, homicides, firearm-related calls and street gang activity. Street gangs were also known to traffic illicit drugs to, and from, the community. This activity was also known to involve criminal elements in The Pas and Opaskwayak Cree Nation (OCN).

Over the course of three-days, officers from units and detachment from across Manitoba as well as with the Manitoba First Nation Police Service worked in the communities of Moose Lake, The Pas and OCN to execute search warrants and warrants of arrest as well conduct compliance checks.

A second search warrant was also executed on July 20 at a residence on Kistigan Road in Moose Lake. A crossbow and ammunition was seized. Information from the location also led to the seizure of a firearm.

In addition, 75 checks were conducted on persons with court imposed conditions or warrants for arrests. From these checks, seven individuals were charged with failure to comply with their conditions and two were arrested for outstanding warrants. One of the persons arrested was identified as one of the most prolific offenders in Moose Lake.

Following the deployment, on July 24, RCMP officers attempted to stop a vehicle for speeding. Officers located the vehicle in Grand Rapids but the suspects had fled into the nearby woods. Police searched the area and recovered a handgun, extended magazine, and cocaine.

Five suspects were arrested and charged with a number of drug and firearm related offences.

It has since been determined that the suspects have a close connection to a Moose Lake illicit drug trafficking network and affiliations to street gangs operating in northern Manitoba.

This further demonstrates how these criminals are operating between multiple detachment areas and shows how beneficial a formal collaborative effort can be under the SERT program.