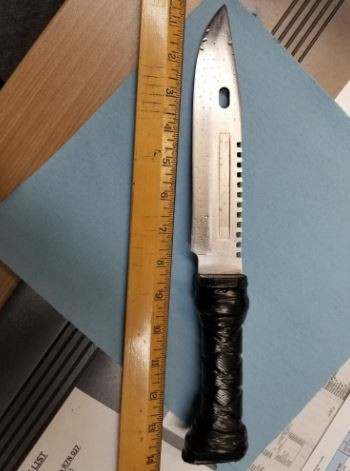 On January 12, 2022, at approximately 3:45 pm, Dauphin RCMP responded to a weapons call on 11th Avenue SW, in Dauphin. It was reported that a male was inside a residence at that location with a knife.

When RCMP arrived, they were advised that the male had left the residence on foot. The suspect was located a short distance away and when officers approached he pulled out a knife. Officers drew their firearms and gave the male verbal commands to drop his weapon, however he refused to follow police direction.

Subsequently, a Conducted Energy Weapon (CEW) was deployed, and the male was safely arrested.
The knife was seized.

Kyle Sutherland, 30, has been charged with Assault on a Police Officer with a Weapon, Carrying a Concealed Weapon, Possession of a Weapon for a Dangerous Purpose, Resisting Arrest and Failing to Comply. He was remanded into custody.