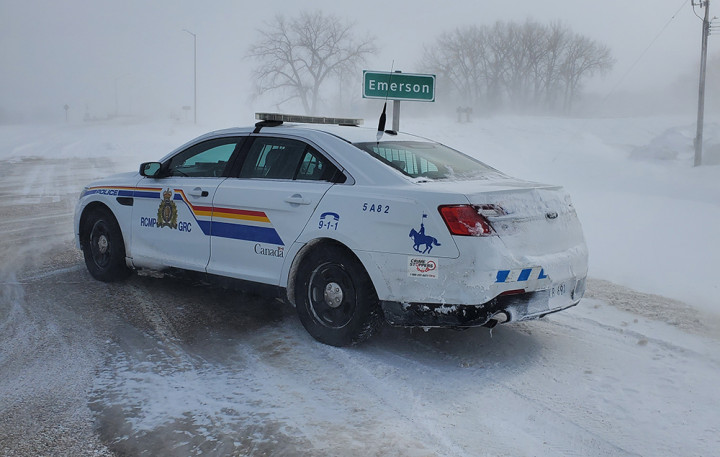 Semi-trailers, farm implements, and passenger vehicles blocked the Canada/United States border at Emerson, Manitoba in the early morning hours of February 10, 2022. Officers from the Emerson and Morris RCMP detachments have been on scene since the arrival of the vehicles, and have received assistance from other RCMP detachments and units throughout the province.

The Manitoba RCMP immediately dispatched Divisional Liaison Officers to the scene, and they are working with the protestors to reach a peaceful resolution.

There are approximately 50 vehicles taking part in the blockade. That number has been fluctuating as vehicles leave and arrive.

Emergency vehicles, including police vehicles, as well as some agriculture transports have been getting through the blockade, but otherwise there is no traffic flow in the area. Police are advising motorists to expect substantial delays in the area and to avoid the Emerson area, if possible.

"We understand and appreciate the frustrations felt by everyone involved and everyone affected," said Chief Superintendent Rob Hill, Officer in Charge of Criminal Operations for the Manitoba RCMP. "The role of the RCMP is to ensure public safety and keep the peace while balancing the rights afforded to every Canadian under the Canadian Charter of Rights and Freedoms.

"The RCMP is on scene and will remain on scene until the situation at the border is resolved. We will continue to use discretion to guide our response to this evolving situation. Let me stress that proper use of police discretion should not be confused with lack of enforcement. We always need to assess the situation at ground level and that may require us to wait for a lower-risk opportunity to do enforcement rather than inflame the situation."

Officers are aware of a number of planned demonstrations throughout the province this weekend and are advising the public to expect delays due to convoys in the areas of Deacons Corner in the RM of Springfield, the Perimeter Highway around Winnipeg, Highway 3 in the Morden area, and the Selkirk area.