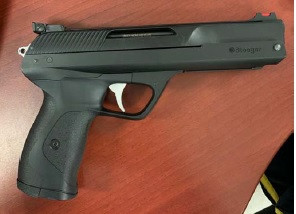 On January 12 at 3:35 p.m., Yarmouth Municipal RCMP members were dispatched to a report of a man with a gun at a business on Starrs Rd. Police responded to the business and located the suspect within minutes nearby. He was taken into custody without incident. A Pellet BB handgun was seized from the waistband of the suspect.

The man was released from custody and is facing charges of Possession of a Weapon for Dangerous Purpose and Carrying a Concealed Weapon. He is schedule to appear in Yarmouth Provincial Court on March 1.