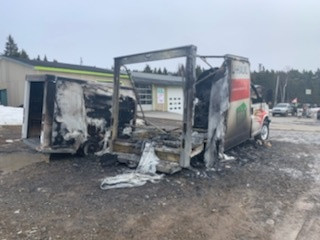 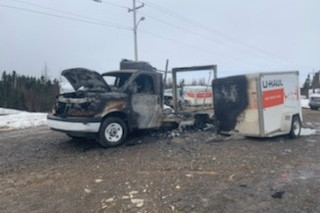 Twillingate RCMP is investigating reports of arson, mischief (damage to property) and theft that occurred over the Easter weekend.

Just before midnight, on April 3, 2021, police received a report of a suspicious fire at Dearings Automotive on Route 340 near Virgin Arm. A U-Haul cube van was completely damaged by fire and a U-Haul trailer, that was parked beside it, was also significantly damaged. A smaller vehicle of unknown make, model or color, was observed on video surveillance pulling onto the parking lot that came from the direction of Virgin Arm. The same vehicle departed a short time later and headed back towards Virgin Arm. A glow from the fire was observed in the surveillance footage shortly after the vehicle departed.

On April 4, 2021, police received a report of damage to three pickup trucks that were parked at the Highway Convenience & Gas Bar on Route 340 in Birchy Bay. The trucks had their fuel tanks drilled and gasoline removed. The incident happened sometime between April 1- 4, and most likely after business hours between 10:00 p.m. and 9:00 a.m.

Anyone having information on either of these incidents is asked to contact Twillingate RCMP at 709-884-2811 or contact Crime Stoppers by calling 1-800-222-TIPS (TIPS is 8477), by Secure Web Tips at www.nlcrimestoppers.com, or by downloading the free and secure mobile app. Search the App Store for "P3 Tips". Electronic tips submitted to Crime Stoppers are encrypted, entirely confidential and completely anonymous.