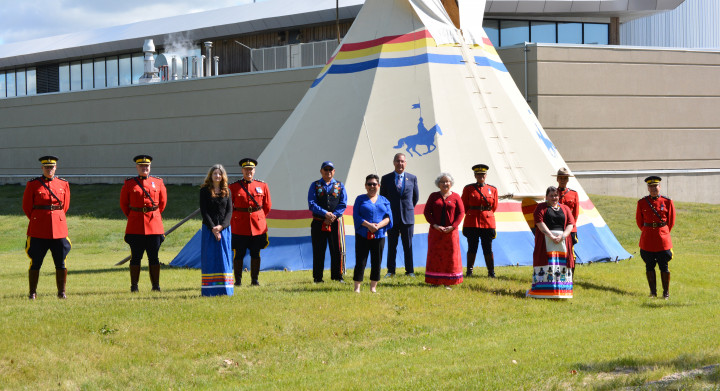 Many Indigenous cultures believe that the eagle has a direct connection with the Creator and that when a person holds an eagle feather, they must be truthful and honest.

The Saskatchewan RCMP wants to provide victims, witnesses, suspects and police officers at detachments across the province with the option of swearing legal oaths on an eagle feather. The eagle feather can be used in the same way as the Bible or an affirmation and is also a source of comfort for a lot of people.

For the past year and a half, we have been working towards being able to provide our clients with this choice. This spring, over 40 eagle feathers from the Government of Saskatchewan's Ministry of Environment were handed over to Elder Howard Walker, using proper Indigenous protocols, and he was asked to prepare them for an Eagle Feather Handover Ceremony.

The Ceremony was witnessed by His Honour the Honourable Russ Mirasty, S.O.M., M.S.M., Lieutenant Governor of Saskatchewan; Mary Culbertson, Treaty Commissioner of Saskatchewan; Tracey Dunnigan, community member employed with the Saskatchewan Public Safety Agency as the Manager of Project Delivery, Indigenous Engagement; and Métis Nation-Saskatchewan President Glen McCallum. The role of the witnesses is to ensure that all proper ceremonial protocols were followed and that the sacred nature of the feathers was preserved.

The eagle feathers will be housed safely at detachments across the province and will be available for clients to use if requested. Detachments will consult with their local Elders or Cultural Advisors and will follow proper eagle feather practices regarding the use, care and handling of the feathers.

We are honoured to be able to provide this option to the people of Saskatchewan and we hope to have eagle feathers at all Saskatchewan RCMP Detachments soon.