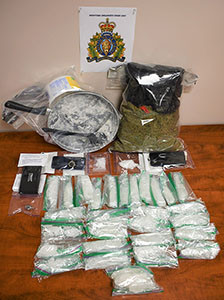 On July 16th, 2021, at approximately 6:00 am, the RCMP's Manitoba Organized Crime Unit, Emergency Response Team and members of the Steinbach RCMP, executed a search warrant at a residence in Winnipeg, Manitoba.

The warrant was obtained by the Portage La Prairie RCMP's General Investigation Section (GIS) members and led to the seizure of just over 1kg of methamphetamine, approximately 1kg of illicit cannabis and a small amount of crack cocaine.

Nelson BERARD, a 43-year-old male from Portage La Prairie, and Ashley ASHAM, a 31-year-old female from Winnipeg, were charged for Possession of a controlled substance for the purpose of trafficking. They were both released on conditions and are scheduled to appear in Provincial Court in Winnipeg on September 16th, 2021.

Those who traffic in illicit drugs destroy lives, homes and communities. The RCMP remains fully committed to enforcing laws against illicit drugs to their fullest extent. Anyone with information regarding drug trafficking is asked to call their local police agency or RCMP detachment.