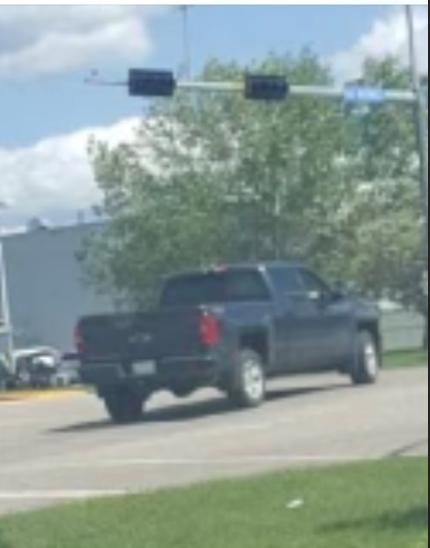 On June 16, 2021 at approximately 1:25 p.m., Leduc RCMP responded to an armed robbery that occurred at the Giant Tiger in Leduc, Alta.

A lone male entered the store, approached the clerks, brandished a firearm and demanded money. The clerks were not physically injured.

The male suspect left the scene on foot with an undisclosed amount of money.

Leduc RCMP responded immediately to the scene and began patrols looking for the suspect.

A witness informed the police that the male suspect got into the passenger side of a truck in the area of 50 Street and 64 Avenue in Leduc, Alta.

The truck is described as a dark coloured Chevrolet Silverado quad cab with a blacked out Chevrolet symbol.

Leduc RCMP would like to speak with the driver of the truck about the incident to ensure their safety.

Extensive patrols were made by Leduc RCMP with the assistance of Leduc Integrated Traffic Unit, Devon RCMP and Central Alberta Crime Reduction Unit, but the suspect was not located.

The suspect is described as:

The investigation is still in its early stages, and more information will be provided once more is known.

If anyone has information regarding the whereabouts of the truck, please contact Leduc RCMP at 780-980-7267 or your local police. The suspect is considered armed and dangerous, if seen call 911 and do not approach. If you wish to remain anonymous, you can contact Crime Stoppers at 1-800-222-8477 (TIPS), online at www.P3Tips.com or by using the "P3 Tips" app available through the Apple App or Google Play Store.