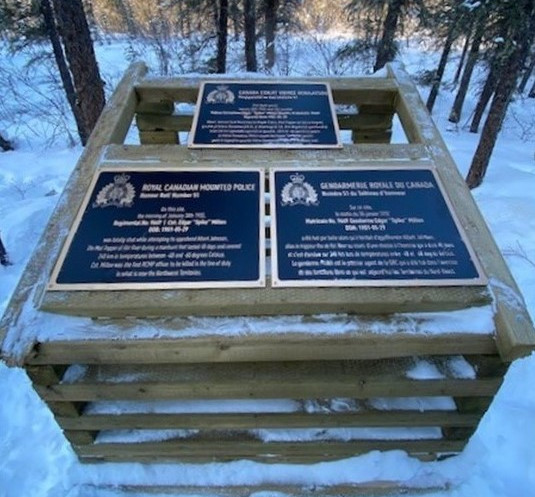 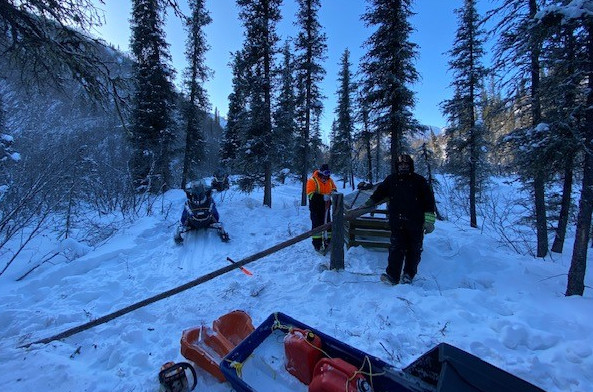 Fort McPherson RCMP have been working together with members of the community on a special project. The Millen Cairn was erected to recognize the ultimate sacrifice of Cst Edgar Millen, when he was killed in the line of duty, January 30, 1932, on Millen Creek, just a short distance from the Rat River near Fort McPherson, NT.

Over the last year or so, the cairn has been rebuilt and permanent plaques have been put up to pay homage to Cst Millen's service. A pole with a Canadian flag now stands at the site as well.

In the attached photo's, Cst Scott Thomas and Cst Tom Lemay (not pictured), of the Fort McPherson RCMP, together with community member Alfred Itsi, work on installing the plaques.

The Gwich'in plaque rests on top of the Canadian official languages plaques, and the Canadian flag hangs proudly. Over 40 km from Fort McPherson, the trail to the site had to be re-established and travel is by snowmachine over the terrain.

A small ceremony has been planned for the week of March 22-26, in which community members who make the journey, along with NT RCMP representatives will rededicate the Cairn to Cst Millen. Arrangements have been made to transport some of the Elders to the site. NT RCMP will share details after the event has taken place.

Thank you to all the Fort McPherson community members who have assisted the RCMP with this important project.