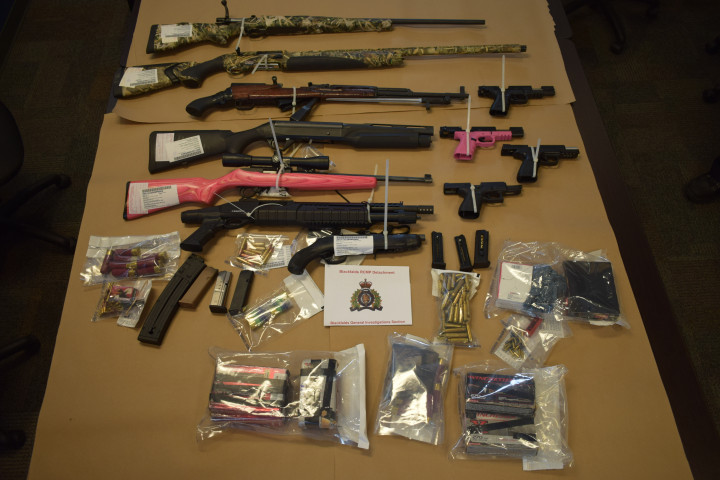 A comprehensive investigation was initiated in January 2021, and saw at least 11 different partnering detachments, units and agencies collaborating to stop an organized firearms straw buying/trafficking operation.

The investigation was launched by Blackfalds RCMP after receiving intelligence about the possibility of the trafficking. Extensive evidence had to be gathered, which included the engagement of firearms partners: The Chief Firearms Officer, NWEST, Red Deer ALERT and Edmonton Police Service's Firearms Investigation Unit. These units were able to provide expertise related to the dynamics of straw purchasing and trafficking.

Three suspects were identified and targeted in the ongoing investigation. On Feb. 12, 2021, search warrants were conducted at residences in both Red Deer and Blackfalds. Because there were two different locations, and given the nature of the searches, Blackfalds, Red Deer, Sylvan Lake, Innisfail, Ponoka General Investigation Section Units and the Red Deer Crime Reduction Team all provided assistance. The RCMP Police Dog Services and Emergency Response Team were also on hand to ensure police and public safety.

Three adults were taken into custody. During the execution of the search warrant, a loaded Glock .22 pistol was located with the three adults. Ten firearms and some ammunition were seized from the residences. Some of the firearms were loaded, and had serial numbers tampered with. Continuing investigation led the RCMP to determine other firearms were purchased. The Blackfalds RCMP anticipate seizing two more pistols from a Calgary business.

A 39-year-old male, a 48-year-old male and a 29-year-old female were all charged criminally on Feb. 13, 2021 related to firearms / firearms trafficking offences.

Judicial Interim Release hearings were held. The 48-year-old male did not speak to bail and was remanded into custody until Feb. 17, 2021. The 39-year-old male and the 29-year-old female were both released and are set to appear in Red Deer Provincial court on March 17, 2021.