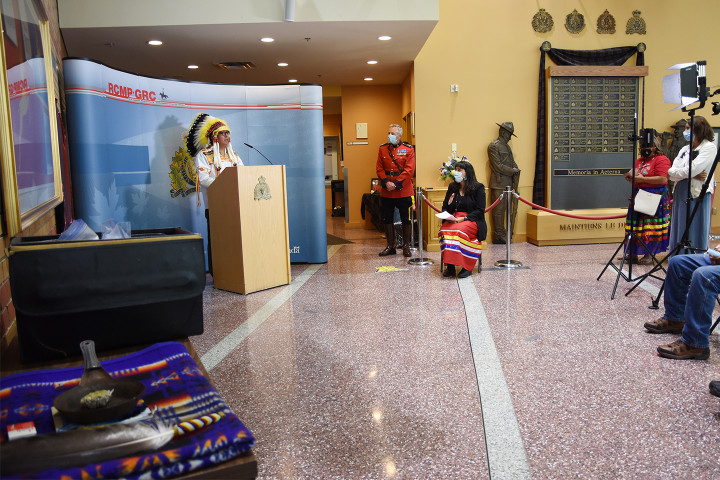 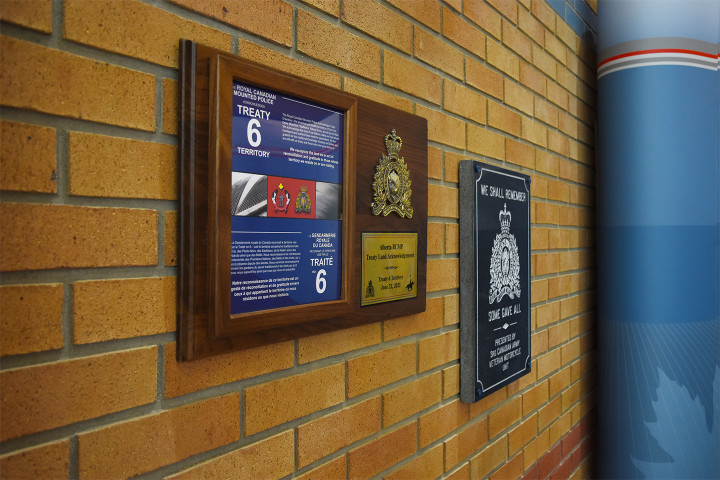 On Monday, June 21, the Alberta RCMP had the honour of welcoming Grand Chief Okimaw Vernon Watchmaker at headquarters for an official Treaty 6 Land Acknowledgment ceremony.

Celebrating National Indigenous Peoples Day and the beginning of a week of activity for the Alberta RCMP, the Land Acknowledgment ceremony began with an opening prayer by Elder Tony Arcand. This was followed by an unveiling of a Treaty 6 Plaque by Grand Chief Okimaw Vernon Watchmaker, which is now mounted in the Edmonton headquarters building. After the unveiling, there was a Smudging of the Plaque and the Indigenous Flags followed by a flag song by Alexander drummers. Deputy Commissioner Curtis Zablocki, Commanding Officer of the Alberta RCMP, participated in the ceremony with an opening greeting and closing comments for the ceremony.

During the week, scheduled is a virtual Metis performance and presentation on First Nations history for staff, a blessing and welcome ceremony for the new Alberta RCMP Eagle staff, and a presentation by Dr. Wilton Littlechild about Residential schools and Reconciliation to our senior leadership.

To see highlights of the events, please follow our social media accounts on Facebook @RCMPinAlberta and Twitter @RCMPAlberta. The Alberta RCMP is committed to continuing our efforts towards reconciliation through ongoing dialogue, learning, and moving forward in partnership with the Indigenous peoples and diverse communities in this province.