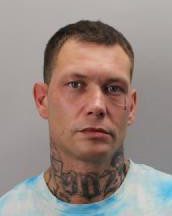 Halifax District RCMP has obtained a warrant for the arrest of a man who has been charged with offences relating to an incident that occurred on September 9, in Cole Harbour.

Ryan James Jessop, 33, of Upper Sackville, is charged with:

Jessop is described as white, 5-foot-10 and 175 pounds. He has dark brown hair and green eyes.

have made several attempts to locate Jessop, however are requesting assistance from the public.

Members of the public are asked to not approach Jessop if he is located, and call police. Anyone with information on the whereabouts of Ryan James Jessop is to contact Halifax District RCMP at 902-490-5020. Should you wish to remain anonymous, call Nova Scotia Crime Stoppers toll free at 1-800-222-TIPS(8477), submit a secure web tip at www.crimestoppers.ns.ca, or use the P3 Tips App.