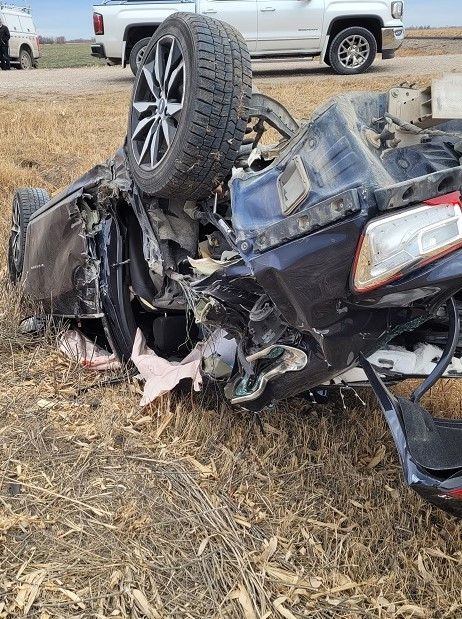 On December 8, 2020, at approximately 2:05 pm, Pembina Valley RCMP responded to a vehicle versus train collision at an uncontrolled intersection, on Road 18 West, just south of Highway 14, east of Winkler, in the RM of Stanley.

A vehicle going north on Road 18 West, collided with a westbound train. The vehicle rolled several times, and the driver, a 53-year-old male from Morden, was taken to hospital with non-life threatening injuries, and was released later that day.

The driver was not wearing his seatbelt at the time of the collision.

Two hours later, at approximately 4:05 pm, Pembina Valley RCMP responded to second vehicle versus train collision at an intersection on Road 23 West, west of Winkler, in the Rural Municipality of Stanley.

A vehicle going north on Road 23 West, stopped at the stop sign, then proceeded when it was unsafe to do so, and collided with a westbound train. This was the same train involved in the first collision. The vehicle was pushed into the ditch, and the driver, a 19-year-old female from Morden, was treated and released at the scene.

The Transportation Safety Board has been notified.

Pembina Valley RCMP along with the Canadian Pacific Railway Police continue to investigate.

"Many railroad tracks in Manitoba go through rural areas and cross roads at uncontrolled intersections," said Corporal Julie Courchaine of the Manitoba RCMP. "Drivers must be cautious and aware of their surroundings. When a train is coming, vehicles should stop at least four and a half metres away from the rails and wait until the train is completely clear before proceeding. Please be vigilant and drive safe."