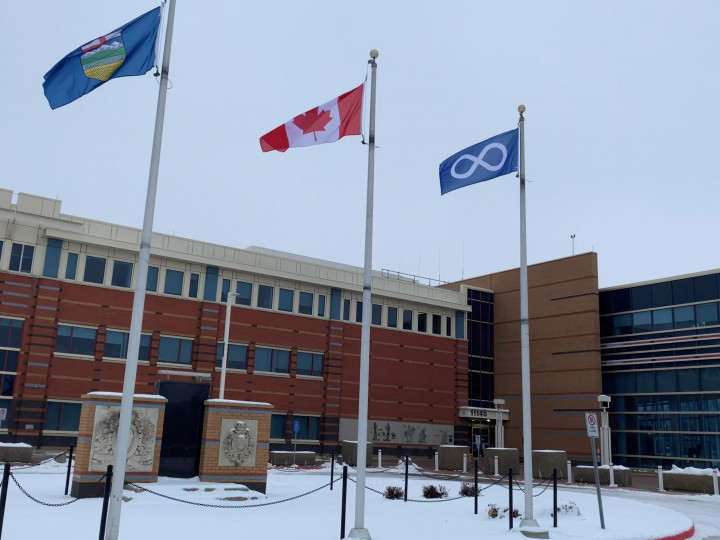 Edmonton – In recognition of Métis Week, November 15 to 21, 2020, the Alberta RCMP will be raising a Métis flag at "K" Division Headquarters. The week is devoted to remembering the sacrifices of the Métis who continue to strive toward rights and recognition as a distinct nation.

In commemoration, Métis people across Canada pay tribute to the Right Honourable Louis Riel by holding a ceremony on the date of his execution, November 16th. This ceremony symbolizes the commitment Métis people share in striving for and promoting the visions of Louis Riel and is one of the most important dates on the Métis calendar.

The promotion of safer and healthier Métis communities is a priority for the RCMP and the Province of Alberta. Since the earliest days of the Northwest Mounted Police, the RCMP has developed a unique and important relationship with Métis people throughout Alberta. The Métis Settlement General Council has recognized that the communities it represents would be better served by an enhanced level of policing service in the eight land-based Métis settlements throughout Alberta. The RCMP is honoured to be invited into these communities, as well as Métis communities across Alberta, and is committed to continuing to provide police service that meets local need.

Reconciliation is constant, a movement towards the future, a reflection of the past, and an ongoing dialogue. Reconciliation is a divisional strategic priority for the Alberta RCMP. The Alberta RCMP is working towards reconciliation through various networks. There is an enhanced focus on Indigenous recruiting by having a dedicated Indigenous Recruiting Unit, ongoing opportunities in employee education including cultural awareness training, and a continual adaptation of operations for the needs of Indigenous youth through engagement programs. This provides youth with access to resources and opportunities to build positive, trusted role models with our members as early as possible as well as create ambassadors who act as bridges between the RCMP and their communities.

The Métis Nation of Alberta will be hosting a multitude of virtual events through the week.