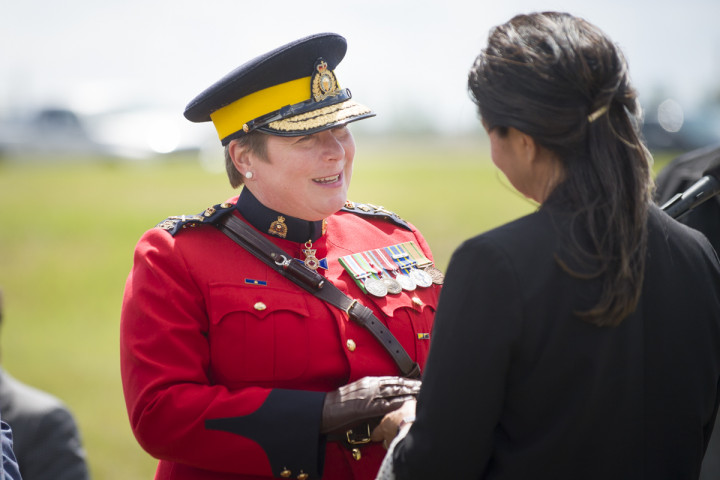 Today, the Honourable Ralph Goodale, Minister of Public Safety and Emergency Preparedness, announced the transfer of the Regina Indian Industrial School (RIIS) cemetery from the Royal Canadian Mounted Police (RCMP) to the RIIS Commemorative Association. This land transfer honours the memory of the children buried in the cemetery during the school's 19 years of operation and implements the Truth and Reconciliation Commission's Call to Action #75 to protect and maintain sites where residential school children were buried.

Minister Goodale, RCMP Commissioner Brenda Lucki, and Sarah Longman, President of the RIIS Commemorative Association, joined local Indigenous communities, elders and families of the children who attended the RIIS, as well as provincial and municipal representatives in a ceremony that forms part of the RCMP's ongoing efforts to advance reconciliation.

The ceremony included prayers from Indigenous grandmothers, remarks by Minister Goodale, Commissioner Lucki and other representatives. Two students read the names of the First Nations from where the students originated, and an honour song was performed in recognition of the students' descendants and relatives. A reception followed at the RCMP Heritage Centre.

The RIIS was opened by the federal government in 1891 and was run by the Presbyterian Church until the school closed in 1910. Over 500 First Nations and Métis children from 43 Indigenous communities across the prairies were sent to the RIIS ranging in age from three to their early twenties. It is estimated that at least 35 of the children who died at RIIS are buried in unmarked graves in the cemetery.

In September 2016, the cemetery received municipal heritage designation and in April 2017, provincial heritage status was granted. Since then, the RIIS Commemorative Association had been working to suitably commemorate this site in line with the Truth and Reconciliation Commission's Calls to Action.

"The treatment of Indigenous people is a scourge on our country's history and the residential school system is but one example. The transfer of the RIIS cemetery has been years in the making and I am proud to have witnessed this milestone day for reconciliation in Regina."

"The RCMP is humbled to have played a role in this symbolic act of reconciliation. The RCMP recognises that reconciliation is not a single event or speech, nor is it something that can be checked off a list. Reconciliation is constant, a movement towards the future, a reflection of the past, and an ongoing dialogue."

"The RIIS Commemorative Association is honoured and humbled to accept title to the RIIS Cemetery land on behalf of the Indigenous communities who had students at the School and the descendants of those students. We pledge to work with others to restore and beautify the cemetery and to suitably commemorate the children who are buried there."

The Regina Indian Industrial School was established and funded by the Government of Canada in 1891 and was closed in 1910. It was operated by the Foreign Mission of the Presbyterian Church of Canada with over 500 First Nation and Métis pupils from age three to early twenties from an estimated 43 different communities across Saskatchewan (primarily), Manitoba and Alberta.

According to documents obtained by the Truth and Reconciliation Commission, within the first six years of operation, 48 students died at the RIIS. It is estimated that 20% of RIIS students who were enrolled from 1891 to 1910 died (many from tubercular diseases) while at school or shortly after being discharged.

Today, a white fence surrounds the RIIS cemetery at 701 Pinkie Road in Regina, SK. It contains the unmarked graves of 35 to 40 children, most believed to be students of the school.

Developments in land ownership of the RIIS and cemetery

After the RIIS closed in 1910, the building served as a jail, and then a juvenile home for boys. A fire destroyed the building in 1948.

From 1911 to 1985, the land was owned by multiple government entities until the Saskatchewan Economic Development Corporation (SEDCO) and the RCMP completed a land exchange to straighten the southern boundary. The cemetery property was subsequently sold to private individuals.

With the cooperation of the Treasury Board Secretariat in the Government of Canada, the cemetery land has now been transferred from its most recent private owners to the RCMP, in exchange for an equivalent adjacent parcel of vacant Crown land.

Reconciliation and honouring the RIIS cemetery

The RCMP is immediately transferring the RIIS Cemetery to the RIIS Commemorative Association, a non-profit organization committed to the protection and preservation of the cemetery. The Government of Canada has initiated the transfer of this land as part of its efforts to implement Truth and Reconciliation Commission's Call to Action #75:

"We call upon the federal government to work with provincial, territorial, and municipal governments, churches, Aboriginal communities, former residential school students, and current landowners to develop and implement strategies and procedures for the ongoing identification, documentation, maintenance, commemoration, and protection of residential school cemeteries or other sites at which residential school children were buried. This is to include the provision of appropriate memorial ceremonies and commemorative markers to honour the deceased children."

The Residential School System left a lasting legacy of intergenerational trauma that tore through Indigenous families and communities for decades. The RCMP is committed to reconciliation and hopes that this gesture will bring peace, comfort, and a measure of closure for all those affected by the Regina Indian Industrial School.