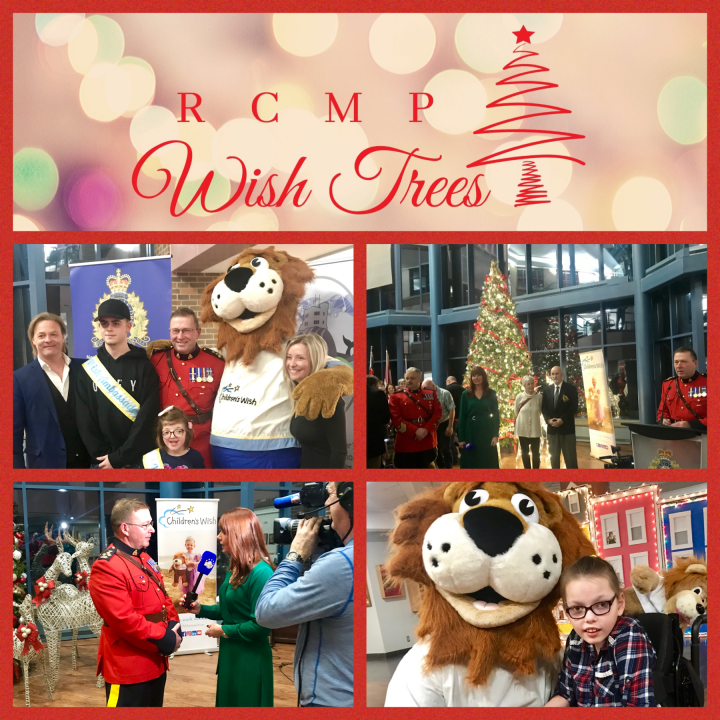 Last evening, RCMP Headquarters was alive with the launch of the RCMP NL 2019 Children's Wish Tree campaign, which has expanded this year to include participation by 23 Detachments, as well as RCMP Headquarters. Nine-year-old Rhea Stark, the current Children's Wish Ambassador, and her newly named successor seventeen-year-old Logan Millard, flipped the switch to light up the 24-foot Christmas tree and officially launch the annual RCMP NL Wish Tree campaign. Started 33 years ago, the campaign has raised over $340,000.00 to grant wishes to children diagnosed with a life-threatening illness or a severe genetic or neurological condition.

"I am so proud to announce the expansion of our Children's Wish Tree campaign from seven detachments participating last year to twenty-four locations this year, including RCMP Headquarters," said Assistant Commissioner Ches Parsons, Commanding Officer of RCMP Newfoundland and Labrador. "The expansion of this campaign would not be possible without the dedication of our police officers and all employees, as well as our community partners and residents throughout the province who have supported the Wish Tree campaign and made it a success. We will continue our work to make wishes come true!"

"The tremendous relationship between the RCMP in Newfoundland and Labrador and Children's Wish has crystalized over three decades of our Wish Tree campaign," said Barry Fowler, Executive Director of Children's Wish Newfoundland and Labrador. "This year marks extraordinary growth through the heartfelt commitment of all RCMP personnel. We are so thankful to the RCMP for such powerful engagement in our mission - to grant the most heartfelt wishes to children in our province living with life-threatening illnesses!"

See the list of locations and dates in the Backgrounder below for the RCMP Wish Tree lighting events happening throughout the province. Everyone is welcome to attend and can support the campaign by donating at your local Detachment. The Detachment Wish Trees start out with all red bulbs and for every donation, a red bulb will turn white. The RCMP is hoping for a white Christmas!