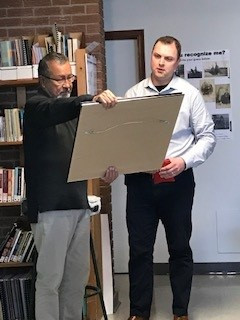 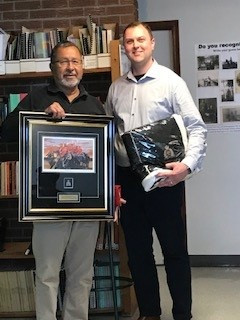 Dr. Dean Jacobs, a prior Chief of Walpole Island and current advisor at the Walpole Island Heritage Centre presented to all in attendance the following:

The history of the Bkejwanong Territory ("where the waters divide") and the Ojibwe, Potawatomi, and Odawa peoples; the Treaties that have been signed in South Western Ontario (of note, Walpole Island is an independent unceded territory); the current legal proceedings in Canada pertaining to Treaties and Land Titles, Walpole Island as a unique area; it is an international bird migration waypoint, hosts 70 endangered species of wildlife, and advocate for maintaining safe waters for Lake St. Clair.

Partnerships were formed through the years while Cpl. Bojaruniec was posted to Sarnia Detachment and that relationship continues today with the residents of Walpole Island and the Walpole Island Police Department.

Cpl. Bojaruniec presented Dr. Jacobs with an RCMP painted portrait to be hung at the Walpole Island Heritage Centre along with ceremonial tobacco and a blanket given by RCMP London Detachment.

This was a great event and future involvements in community partnerships are being planned.