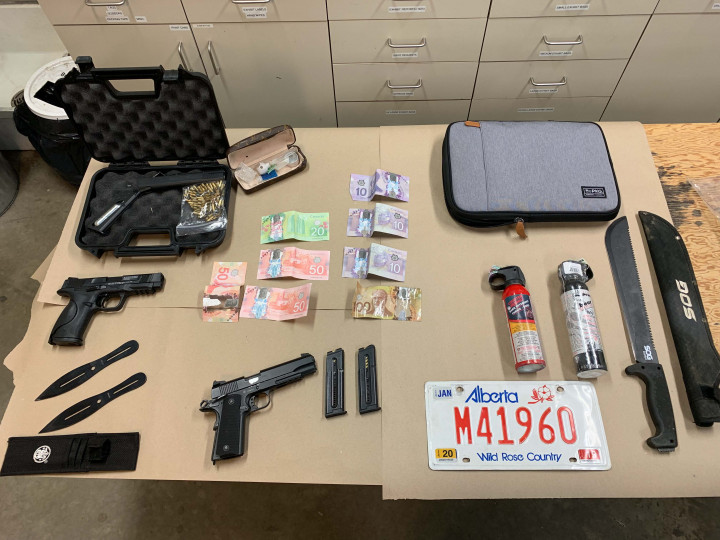 On September 5, 2019 at approximately 8 p.m., the Grande Prairie Crime Reduction Unit (CRU) was conducting patrols in the downtown area of Grande Prairie when they located a vehicle with a stolen licence plate.

The CRU unit conducted a traffic stop and as a result of an investigation the driver and one passenger were arrested. During a search of the vehicle police seized a small amount of methamphetamine, a loaded restricted firearm with a tampered serial number, counterfeit currency, two cans of bear spray, a machete, two throwing knives and an imitation firearm.

A 38-year-old male of Red Deer was charged with Traffic Safety Act offences as well as a total of 11 Criminal Code offences, including possession of a restricted firearm with ammunition without a licence, tampering with serial number of a firearm, possession of a weapon contrary to order and possession of counterfeit money.

He appeared in Grande Prairie provincial court on Sept 9.

The passenger, a female youth, was charged with possession of a controlled substance. She appeared in Grande Prairie provincial court on September 16.

As this matter is before the courts, no further information will be provided.

Crime reduction continues to be a policing priority for the Grande Prairie RCMP. Proactive enforcement such as this demonstrates our commitment to Alberta's Crime Reduction strategy and helps create a safer community.