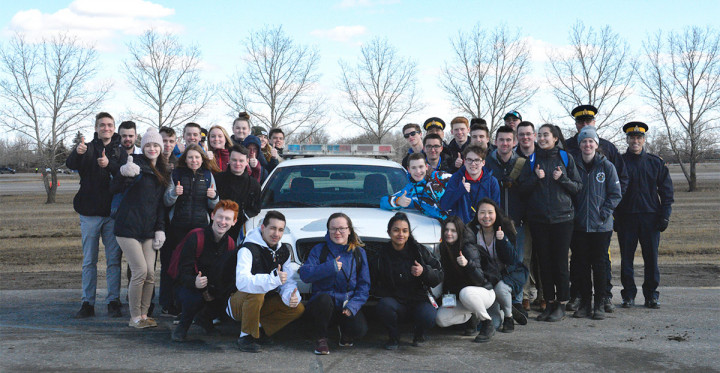 This week, 31 high school students from across Canada spent a week training like a Mountie at the RCMP Academy, "Depot" Division in Regina, Saskatchewan, as part of the RCMP's third National Youth Engagement Week.

The students were immersed in the life of an RCMP cadet, eating and sleeping on site, trying their hand at the RCMP's driving and shooting simulators, and learning about how to apply the law in different police scenarios. They also jumped through the rigorous hoops of cadet physical training, self-defense and drill.

During their downtime, the teens got a full tour of Depot and learned about the history of the RCMP at the RCMP Heritage Centre.

"This week has felt like my dreams come true, which only makes me want to work harder to someday reach the dream of attending here [Depot] as a cadet." says Erin, a student from Quispamsis, New Brunswick.

The teens were selected from provinces and territories across Canada based on a number of criteria, including academic achievement, community engagement and a demonstrated interest in law enforcement.

"It was truly a pleasure to spend time with such a great group of teens during National Youth Engagement Week," says Staff Sergeant Mario Cournoyer of the RCMP's Heritage & Ceremonial Section. "They were motivated, enthusiastic and eager to learn — the ideal candidates for recruitment.We hope by experiencing what it's like to train like a Mountie, they'll seriously consider a career in policing with the RCMP."