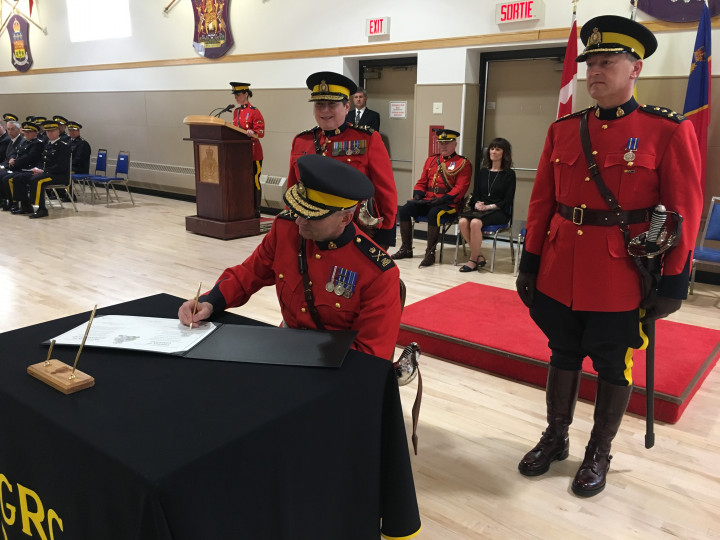 Earlier today, special guests and RCMP employees officially welcomed Assistant Commissioner Mark Fisher as the Commanding Officer of the Saskatchewan RCMP in a traditional ceremony held at the RCMP Academy in Regina.

The formal Change of Command ceremony involved RCMP Pipes and Drums, ceremonial uniformed and civilian troops, a flag party, and the RCMP national eagle staff. The handover of command of the Saskatchewan RCMP was symbolized with a parchment signing and the transfer of the Divisional ensign from outgoing Commanding Officer, Deputy Commissioner Curtis Zablocki.

"I am extremely humbled and honoured to be here today, in this historic Drill Hall, to take command of "F" Division and RCMP policing in the Province of Saskatchewan," said Assistant Commissioner Fisher. "I feel fortunate to be here in Saskatchewan at this time. We enjoy strong support from government and already I have seen their interest in supporting innovation and modernization efforts both on the operational and administrative fronts. The same goes for our relationships with key partners at SARM, SUMA, FSIN, and the Métis Nation. Their willingness to embrace change and accept some of the risk that comes with innovation makes it a great environment to work and lead in."

"Time and time again, Assistant Commissioner Mark Fisher has proven to be a respected, accountable leader," said Brenda Lucki, Commissioner of the RCMP. "As an organization, our priority is to put our people first, and Mark is already doing just that in his new role as Commanding Officer of Saskatchewan. I'm proud to be working alongside him to modernize our RCMP."

The Change of Command Ceremony provides an opportunity for the divisional membership of the Royal Canadian Mounted Police, as well as the community at large, to bid farewell to their Commanding Officer. It also allows for the welcoming of a new Commanding Officer for the Division.