A voice of comfort 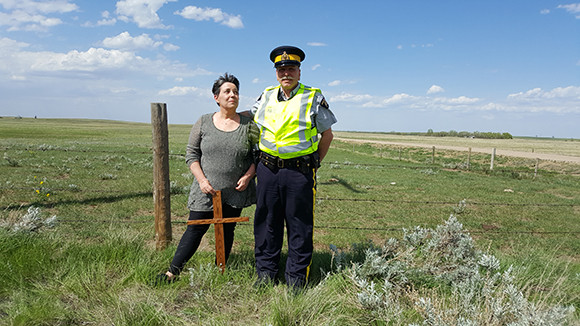 RCMP Cst. Ian Frost saw his fair share of fatal accidents during his seven-year posting in Maple Creek, Saskatchewan. In addition to frequent farm related injuries and deaths, the small town of 2,200 sits close to a stretch of the TransCanada Highway known for deadly collisions. On the morning of April 14, 2000, when Cst. Frost was the first responder to arrive at the site of a deadly bus and transport trailer pile-up, he knew from the column of black smoke he saw rising in the distance that he was approaching a disaster.

During a sudden and intense spring snow squall, a livestock transport truck loaded with live pigs had collided with two tour buses, both of which were mercifully empty except for their drivers. The collision also involved a pick-up truck and a second transport. A large volume of diesel fuel was spilled on the highway resulting in a treacherous fire. One of the tour bus drivers had been thrown from his vehicle and was clinging to life when Cst. Frost arrived. The driver of the second bus and the transport truck driver were already dead. "I checked the surviving driver for vital signs and did what I could for him before inspecting the rest of the scene. I knew fire and ambulance were right behind me," said Cst. Frost. Unfortunately, the surviving driver later succumbed to his injuries. The rest of Cst. Frost's morning was taken up by duties that were both difficult and compassionate, as he and the other police officers who arrived on scene euthanized approximately one hundred pigs that were suffering terribly from burns and other injures. "It was hard, but we did what we had to do," says Cst. Frost.

Back at his detachment, Cst. Frost used the license plate numbers on the vehicles to track down the owners. By the end of the day, he'd managed to speak with family members of all three deceased men. Three separate times, he spoke with Françoise Letarte, the wife of the bus driver he'd attempted to save. She mentioned the unique sweater she'd given her husband, the same sweater Cst. Frost remembered seeing on the driver thrown from the tour bus. Originally from Montreal, Quebec, Cst. Frost was able to speak both French and English, providing her with the calm, compassionate reassurance she needed on that painful day.

Like most police officers who deal with traumatic events, Cst. Frost took this fatal collision in stride. He moved on with his career and in 2003, he transferred to the National Capital Region where he's been working at the Supreme Court detachment since 2017. Last spring, he received a phone call from a producer for "Deuxieme-Chance", a Quebec television program that focuses on stories that re-connect people. Eighteen years after her husband's tragic death on that Saskatchewan highway, Ms. Letarte reached out to the program, told them her story and indicated that she finally wanted to meet the RCMP officer who had provided her with the empathy she needed on one of the worst days of her life. Cst. Frost was surprised by the call, but happy to oblige her request.

On May 16, 2018, Cst. Frost came face-to-face with the bereaved woman he'd comforted over the phone almost two decades earlier. It was an emotional experience for both of them. "She told me she remembered my voice. I had no idea I'd had such an impact on her, but I was glad that I'd been able to comfort her. I think it's one of the most important things we do as police officers," said Cst. Frost.

"Deuxieme-Chance" brought Cst. Frost and Ms. Letarte to Maple Creek, Saskatchewan, where Cst. Frost identified the stretch of highway where the collision occurred so Ms. Letarte could place a commemorative cross made by her nephew. "I recognized the area because the fire had basically melted the asphalt so the road had to be repaired as soon as the accident site was cleared. The new section of highway is still a different colour," said Cst. Frost. Ms. Letarte and Cst. Frost each spent some time alone on the site, he reliving his memories of the day and she leaving the cross and saying a private goodbye. Said Cst. Frost, "It must have been hard for her to be there, on that exact spot. I hope it gave her some closure."

After 32 years with the RCMP, Cst. Frost isn't ready to retire. He's enjoying his job with the Supreme Court Detachment and plans to keep on working for a few more years. Looking back over more than three decades in policing, a career in which he's had to deal with a police officer's usual share of traffic fatalities, deadly farm accidents and suicides, that morning on the highway in Saskatchewan still stands out as a dramatic example of how a routine day can suddenly turn into an unforgettable one, an occasion to help another soul in desperate need.