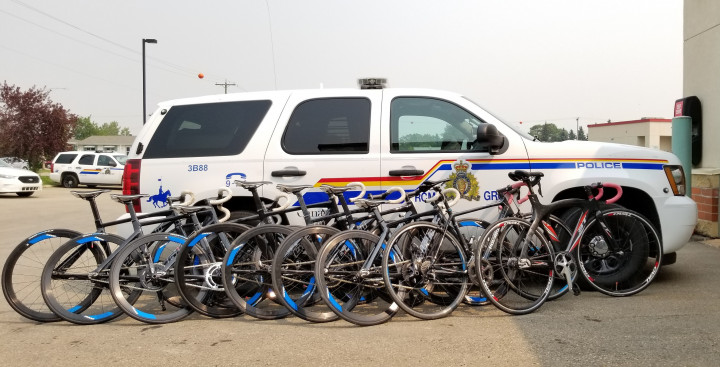 On August 2, the RCMP Central Alberta District (CAD) Crime Reduction Unit (CRU) investigated information which led them to an abandoned property near Nisku, Alta., where nine stolen, specialty racing bicycles were stashed. The bicycles were recovered by the RCMP and have been seized for investigation purposes.

On July 18, 10 bicycles were reported stolen in Edmonton as a result of a break and enter to a cycling facility. The bicycles belonged to members of an international racing team who were training in Edmonton.

The nine recovered bicycles appear to be undamaged, and will be returned to their owners once the RCMP have completed their investigation for evidence purposes. The value of the bicycles recovered is believed to be in excess of $40,000.

"It's outcomes like these that make our Crime Reduction Unit members very happy" says Corporal William Hiscock with the Central Alberta District CRU. "We understand the loss that the racing team felt and we're very pleased to be able to return these special bikes."

No charges have been laid by RCMP to date, but the investigation is progressing well. A further update will be provided when able.