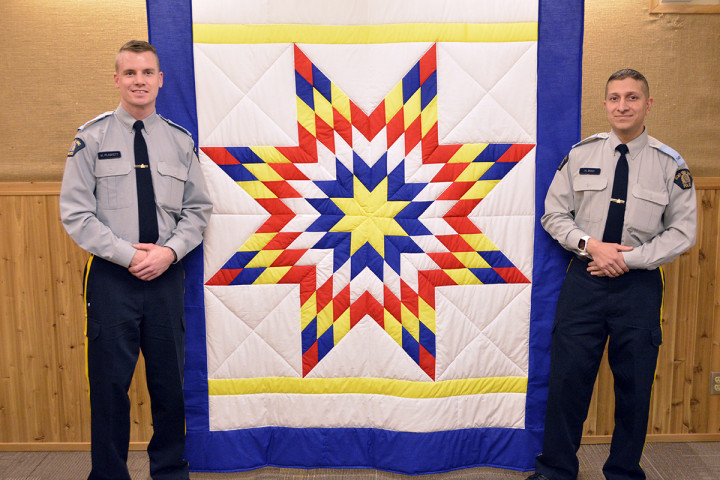 In the spirit of encouraging reconciliation with Indigenous peoples, a blanket exercise on Indigenous history has been added to the regular Cadet Training Program at the RCMP Academy.

All RCMP cadet troops will complete the exercise as part of their training.

Troop 10 was the first troop to have experienced the blanket exercise last week. Troop 11 will complete it this afternoon.

The blanket exercise is a creation of KAIROS Canada. Participants take on the roles of Indigenous peoples in Canada. They stand on blankets representing their land and physically walk through the historical eras of pre-contact, treaty-making, colonization and resistance. Throughout the exercise, they read cards describing historical events and the blankets are folded until they represent the land Indigenous peoples own today.

The interactive exercise had a major impact on cadets. Cadet Matt Plaskett of Troop 10 said: "When we started getting pushed off our blankets, it turned into a real emotional moment for all of us. It gave me a perspective I've never had before."

His troopmate, Cadet Habeeb Shah, added: "I want to carry the knowledge and the empathy I got today with me going forward. More than ever, I am inspired to build bridges between this uniform and Indigenous people."

The exercise is included in the RCMP Cadet Training Program as part of the module on missing persons.

It will be performed by RCMP Academy instructors under the watchful eye of a knowledge keeper, an Elder from Saskatchewan.

The RCMP Academy believes this addition to its curriculum will further engage cadets in the history of our peoples and will have a durable impact on their work in the field.

The RCMP Academy is proud to be contributing to a positive reconciliation through greater understanding and empathy.