The leader of the pack 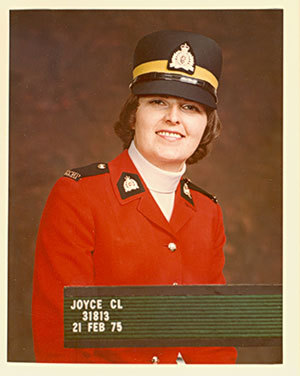 Two words to gather the 31 fresh-faced women into a military formation that Cheryl Joyce boomed time and time again at the RCMP Academy, "Depot" Division, after she became part of the first female troop to take residence in September 1974.

As the right marker and oldest member of the troop, the 29-year-old was responsible for overseeing Troop 17, including ensuring they marched together from class to class, maintaining discipline and harmony within the troop and providing almost-daily reports to the sergeant major who took a particular interest in the progress of the group.

"I would go to drop off the day's attendance sheets and nearly every day I hear: "Joyce, get in here" shouted from his office," she recalls.

"As a troop, we had our ups and downs but in the end we worked very well together," she says from her home in British Columbia's Okanagan Valley. "When I think back, some of the things that happened were pretty funny, but it was stressful at the time."

Sworn in on Sept. 16, 1974, with five years of experience as a teacher under her belt, Joyce's career in the RCMP followed along the same path.

From the early days at Depot, to later becoming an instructor there, to her last assignment sharing restorative justice principles with police officers and the community, and then as an English as a second language coach in retirement, teaching is the thread that runs through Joyce's life.

"I loved being involved in trying to make things better for people," she explains.

Her passion was working with Aboriginal communities from her earliest postings in several detachments in the Edmonton, Alta., area. "I really started to understand the history of reserves and the role that history played in the problems of people there," Joyce says. From lack of education and opportunities to a lack of parenting skills, the challenges were many. "I was really attracted to trying to make a difference for them."

The RCMP announced in May 1974 that it would accept applications from women. Joyce was teaching in Regina, Sask., and was friends with a Mountie who tried to get her to join. She didn't think it was for her but picked up an application to get information for her students. Much to her surprise, she found herself filling out the forms.

"I just wanted something that was outside of four walls," she recalls. "I needed to be out in the community."

Joyce's 30-year career started in Stony Plain, Alta., located just west of Edmonton. As the first woman in the detachment, she was a source of curiosity at first. "I walked in the detachment and the secretary's first words were 'that's what you look like. Everybody's in the back waiting for you'," she laughs.

After 13 physical moves and as many different positions, Joyce doesn't even need a moment to say what she's most proud of when looking back on her career.

It was her last posting as the first National Restorative Justice Coordinator that had her travelling across the country – including 23 different communities in Nunavut alone – to teach fellow Mounties, Aboriginal elders and community volunteers how to better resolve issues involving non-criminal conflicts in their communities. Based on the traditional native healing circle, restorative justice is a non-adversarial approach to creating healthier, safer communities focused on healing for victims and accountability for offenders.

The impact of her work with Aboriginal people, particularly the Inuit, is felt through the art lining the walls in every room of her home. One that holds particular meaning is an ink etching of a rock cairn in the Arctic given to her by a woman in her 80s in the first Inuit community she visited. Her voice catching, Joyce says the woman had returned to school to learn to "record the history" of her people.

That she had an impact as a result of that first visit to an RCMP office to get career information for her students four decades ago can't be denied.

"It would bring tears to your eyes because of the healing that would take place," she says. "One woman actually thanked me for bringing back her culture. It was a passion and so rewarding to know I really was making a difference."