Karen Adams - A 28-year career well worth it 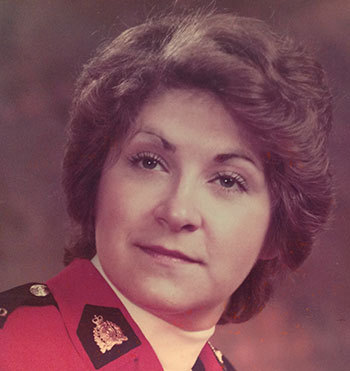 She can't help but chuckle as she tells the story of a very frustrated, tough-as-nails instructor who was trying to teach the RCMP's first female troop the highly precise drill routine they would perform during their upcoming graduation.

"He was so frustrated he actually broke his drill cane smacking it on his knee," Karen Adams laughs as she recalls the moment shortly after Christmas in 1975. "These canes are sacred to a drill instructor and I will never forget the look of utter shock on his face when it snapped."

Adams, now retired and living in Edmonton, was 22 when her father woke her up in the family's Winnipeg home on a mid-May morning in 1974 to tell her the RCMP was accepting applications from women to be police officers.

Within less than four months, she and 31 others across the country were being sworn in as the Force's first female police officers. Shortly after, Adams was on her way to the RCMP Academy, "Depot" Division, in Regina, Sask. to become part of Troop 17, and take her place in RCMP history.

Over the years more and more opportunities for specialization within the RCMP opened up for women, but Adams knew from very early on that she wanted to return to Depot as an instructor.

"I just had this fire to inspire people to be the best they can be," she explains. Of her 28-year career with the RCMP, a dozen years were served teaching fresh-faced cadets. After her retirement from the RCMP, she went on to a second career teaching at Edmonton's MacEwan University in the Law Enforcement program until last year.

Her inspirations for a policing career were a couple courses she took while studying social work and, she grudgingly admits, the policewoman on the popular TV show of the day, Ironside. Eve Whitfield, played by Barbara Anderson, was strong, competent, and yes, beautiful, Adams recalls. She laughs that it was "foolish" but "she awoke my inner spirit. I'd never seen a woman in such a role!"

After a varied career with five physical moves and seven postings during her 28 years as a police officer, Adams is most proud of doing all that while raising two successful, independent, strong daughters who are her best friends. As a single mom from the time her youngest was two months there were many challenges, but the family of three made it work. "We did what we had to do to have the family we wanted," she says, the pride clear in her voice. 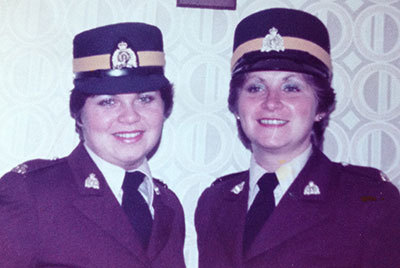 She's also very close to her younger sister, Shelley Marsh (nee Somers), who followed in her footsteps and joined in 1977, making the pair the first sisters in the Force. "Ironically, I was in Manitoba and her first posting was Penticton, B.C. We never served in the same division (province) but shared similar experiences… She, too, had an amazing career."

When asked what it was like being the first sworn woman in a detachment, Adams offers two stories to illustrate. The first is that when she reported for duty in Thompson, Man., fresh out of Depot and she told the counter receptionist why she was there and asked to see the commander. It was a few minutes later that "all these heads started peeking around corners," she laughs. "They wanted to get a visual on the woman who was going to change their world."

The second story was about her first arrest with her training officer. A report was made about an intoxicated man and woman in a bar that happened to be across the street from the detachment. When it became clear the pair needed to be arrested, her training officer took the woman and she took the man. "As we were putting them in the paddy wagon, I looked across the street and everyone was lined up at the windows giving me a round of applause."

There's no question that it wasn't an easy career but it was one well worth doing, Adams says.

"There were some colleagues who found it difficult to accept women as RCMP officers," she says, quickly adding, "but most female members in those early years would not have survived without the mentorship and friendship of the men around them."