It's all about the small, unforgettable moments 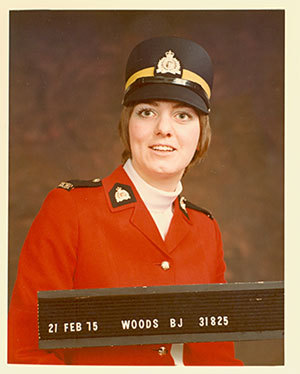 It was around the age of eight when Barb Alexander became enthralled with becoming a Mountie.

The time was the early 1960s in Fort St. John, B.C., a rough oil town in northeastern British Columbia, when her single mom was first asked to provide home-cooked meals to the local RCMP officers.

With six kids, her mom provided room and board to labourers to make a living. One day, some of the single Mounties started showing up. "They were tired of cooking for themselves so they started taking meals with us."

"They were such gentlemen," Alexander (nee Woods) recalls. "I didn't have a father and they were someone to look up to."

They had such an impact that she never really considered a career other than policing. She worked a summer job as a dispatcher with Nelson Sub Division and later worked the front counter with the Victoria police for two years.

It was while she was in Victoria that the RCMP announced on May 24, 1974, that it would take applications from women. "I called the staffing office that day and the man who answered happened to have been a co-worker when I was a dispatcher," says Alexander, laughing at how small the RCMP world can be.

By Sept. 16th of that year she was sworn in and heading to the RCMP Academy, "Depot" Division, in Regina, Sask., to take up ranks in the first female troop – otherwise known as Troop 17.

Unlike many of her 31 troop mates, the then-20-year old didn't feel overwhelmed or nervous when she first walked onto the sprawling base.

She remembers that it was when she first saw other troops marching in formation from class to class that it really hit her; she was exactly where she'd wanted to be since those early years in Fort. St. John. "I was curious and I was so excited to finally be there."

And her career was so much more than she'd hoped. "It was a great career that was challenging and incredibly rewarding," she says from the home in Victoria where she retired with her late husband, also a veteran RCMP officer.

She learned early on in her first posting to Cranbrook, B.C. that a good sense of humour was going to see her through as her fellow officers got used to having a woman working with them. An example she recalls is the day she received some uniform supplies at the detachment. At the time, included in the women's uniform "kit" were nylons, bras, and purses fashioned with a holster for the firearm, along with traditional items like the muskrat-lined hats for winter.

"They wrote 'winter-weight pantyhose' … on the brown paper wrapping the box," she laughs. "The Staff-Sergeant made them rewrap it because he couldn't be sure I would take it as a joke."

While she was enjoying the job, she was lonely. "I wasn't one of the guys, or the secretaries, or the wives. After work, I felt alone."

At the same time, she became involved in what would become the theme for the rest of her career, and ultimately build a community of friends.

A 14-year-old girl had been sexually assaulted by four men but wouldn't talk to the investigator at a neighbouring detachment. So Alexander was called in to see if the girl would open up to a woman. "She told me everything because she knew that on some level I could relate. And I was only six years older than she was!"

After a similar request at another detachment, it became clear that women in the community needed to be taught skills to keep themselves safe and Alexander soon started doing presentations on the subject.

A trip to Victoria and a meeting with the officer who wrote the "Lady Beware" program that Alexander wanted to implement in her detachment, changed her life forever. That officer was Don Alexander, the man who would become her husband.

One of their two daughters followed in their footsteps and joined the RCMP in 1995. "Don and I both presented Heather with her badge when she graduated from Depot," a first for the RCMP.

After several transfers and a five-year break when the children were young, Alexander made her after-hours passion her focus by joining the community policing unit in Port Alberni, B.C. Her passion was recognized when she earned the first Crime Prevention Practitioner of the Year award for the province in 1988.

Her last posting three years before retiring in 2001 was with Crime Stoppers in Victoria creating re-enactments and other appeals for crime-solving tips from the public. "It was such a rewarding and fun posting – a great way to end my career." she says.

Part of the reason she retired was a growing business she created after a 1999 trip to the Indonesian paradise, Bali. Enamoured by the locals, she started a business designing and importing fabrics for women's clothing. Now, she organizes tours for women through her company, Bali Fiber Tours, and mentors locals starting their own small businesses. Her co-leader is troopmate, Cheryl Joyce.

In many ways her current work flows from her community policing work – both are about genuinely connecting with people and helping them help themselves.

And it's that impact she's most proud of. Two occasions come to mind to illustrate for Alexander: one of running into a man who, with tears in his eyes, told her how much of a difference she'd made in his family years earlier; and the second of the young woman in a grocery store who thanked Alexander for helping her get through her years of teenage rebellion.

"From time to time there's an occasion, a small but unforgettable moment. That's what made it all worthwhile."