Human trafficking and the law

Human trafficking involves the recruitment, transportation or harbouring of persons, or the control of their movements, for the purpose of exploitation. Typically, victims are trafficked for sexual exploitation or forced labour. Human trafficking crimes are a violation of a person's basic human rights.

Traffickers recruit and control victims by identifying their needs and vulnerabilities. They often use violence, intimidation or deception to control their victims. Learn more about traffickers and their victims.

Human smuggling is different from human trafficking. Human smuggling is a form of illegal migration where smugglers transport people across an international border, usually in exchange for money. When they reach the final destination, the smuggler and the individual part ways.

There have been instances where people who asked to be smuggled into a country became human trafficking victims, at the hands of their smuggler.

Criminals exploit victims of human trafficking in various ways. In most cases, they traffic victims for one or more of the following:

Victims are forced to:

Victims are forced to:

This includes trafficking persons to remove their organs for transplantation. This type of trafficking is not prevalent in Canada.

Human trafficking may happen across or within borders and may involve organized crime networks.

Domestic human trafficking refers to cases where criminals traffic victims within Canada. It doesn't matter if the victim is a citizen, visitor, student or work permit holder.

International human trafficking refers to cases where criminals move victims across an international border. Again, it doesn't matter what the victim's status is in Canada.

The law in Canada

Human trafficking is a criminal offence under several sections of the Criminal Code. The Immigration and Refugee Protection Act also contains several provisions against cross-border trafficking.

Learn more about human trafficking legislation on the Department of Justice website.

When it comes to human trafficking, the RCMP:

To investigate human trafficking cases, we use information from various sources, including: 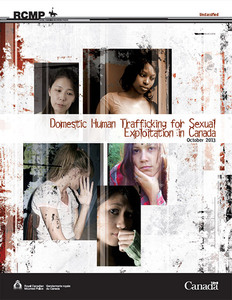 This report is based on domestic cases of human trafficking for sexual exploitation between 2007 and 2013. The report provides insight into:

For a copy of the 2014 report, send an email to NHTS-SNCTP@rcmp-grc.gc.ca.