History of the RCMP Musical Ride

A world-famous show, the Musical Ride has played an important role in the RCMP since 1873.

Early history of Mounties on horseback

From its inception in 1873, the North-West Mounted Police (NWMP) relied on skilled riders to carry out police duties across the Prairies. Patrolling the vast and sparsely inhabited area, NWMP members were frequently the only government officials new settlers would encounter and were essential to preventing prairie fires.

To break the monotony of endless riding drills, members of the Force commonly competed amongst themselves and performed tricks on horseback. In 1876, some of these tricks and exercises were performed at Fort Macleod, Alta. This is believed to be the first public performance of what would eventually evolve into the Musical Ride. 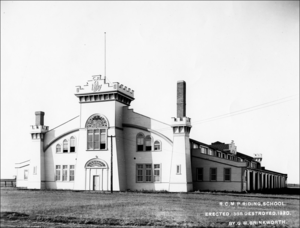 In 1886, the NWMP's first riding school was established in Regina. During the winter of 1887, there were five public performances at the Regina barracks. The Ride was performed only in the winter because many of the policemen resided in Regina until they could resume their summer patrols. Later that year, the Riding School at Depot burned down, and by the time it was rebuilt, key personnel needed to organize the Ride had been transferred or had left the Force. There is no record of another Musical Ride until 1901.

In 1901, the Ride performed in Brandon, Manitoba and Qu'Appelle, Saskatchewan. After this time, Rides were performed occasionally at agricultural exhibitions, fairs and horse shows. On July 28, 1908, a Musical Ride was performed in Quebec City as part of that municipality's 300th anniversary celebrations. The Prince of Wales attended, becoming the first member of the Royal Family to witness the Ride. This was also the first time a Musical Ride was performed outside of Western Canada. Musical Rides continued to be performed for the public until the start of the First World War in 1914. 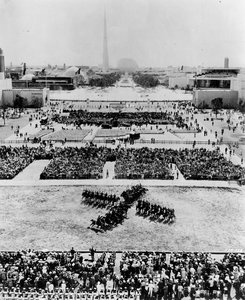 Musical Rides were cancelled in 1914 at the outbreak of the First World War and were not held again until 1920. In that year, the now-Royal NWMP absorbed the Dominion Police, the federal police force for Eastern Canada, and became the Royal Canadian Mounted Police (RCMP). The RCMP headquarters were then moved to Ottawa, Ontario, and "N" Division was established in nearby Rockcliffe.

"N" Division immediately organized a Musical Ride and performed at Lansdowne Park in Ottawa on May 24, 1920 and in Brockville on July 1, 1920. There were performances almost every year from both "N" Division and Regina. In the 1930s, a third Ride was organized in Vancouver, B.C., (known as "E" Division), with five performances in Vancouver.

By this time, the Ride had become an established attraction, and in 1939, new stables were built in Ottawa: a one-story brick-veneer structure designed by local architect W.C. Sylvester. The horses had previously been lodged at Lansdowne Park and then in a wooden building in Rockcliffe.

In 1939, the Ride was a great success at the World Fair in New York. However, any plans for the future were shelved when the Second World War broke out; there would be no further performances until 1948. 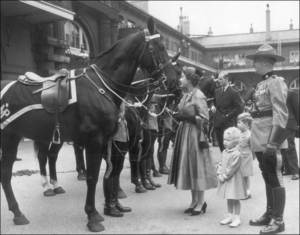 1948: Musical Rides were once again organized, but mostly from N Division. The show was performed at a number of locations in Canada and the United States. However, the Rides were not held every year; for instance, there were none in 1950-1951, 1954-1955 and 1960.

1953: The Musical Ride returned to England for the first time since 1930 to perform at the Coronation of Queen Elizabeth II.

1957: The Ride performed in Scotland as part of the Edinburgh Tattoo.

1961: The RCMP obtained ministerial authority to establish a permanent Musical Ride in Ottawa to perform annually in Canada and abroad.

1962: The final Ride performed by the Musical Ride troop based in Regina. Since then, the Ride has been based exclusively in Ottawa.

1964: The Ride performed for the first time in New Brunswick, Nova Scotia and Prince Edward Island.

1966: Equestrian training stops being mandatory for all recruits. Since then, only members assigned to the Musical Ride receive this training.

1967: As part of the Force's contribution to Canada's Centennial Year, the Ride performed in nine provinces, (except British Columbia).

1968: The Ride travelled by air for the first time when it performed in Bermuda.

1969: On a tour of the United Kingdom, the Ride performed in Wales for the first time; also the Ride escorted the Queen from Windsor Castle to the showgrounds; this was the first time any troop other than the Household Cavalry had been permitted this escort.

1974: The Ride made successful tours of continental Europe.

1977: The Ride toured in Ireland and United Kingdom to participate in the Queen's Silver Jubilee celebrations.

1988: The Ride made successful tours of continental Europe.

1989: The Equitation Section began holding free performances at its stables in Ottawa. Known as the RCMP Sunset Ceremonies, the performances take place every year in June.

Today, the RCMP Musical Ride consists of 32 riders plus the member in charge. It executes a variety of cavalry drills choreographed to music. The Ride tours throughout Canada and internationally between May and October, performing at approximately 40 venues each year. The present stables in Ottawa were built in 1993; the original stables built in 1939 now house the Visitor's Centre.

Gifts to the Queen 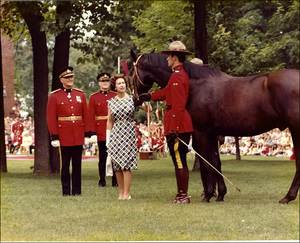 Queen Elizabeth II takes a keen interest in horses and is highly knowledgeable about them. As Honorary Commissioner of the RCMP, we have presented Her Majesty with 8 horses as gifts.

In the autumn of 1968, S/Sgt. Ralph Cave, the RCMP's riding master in Ottawa, suggested we present one of our horses as a gift to Queen Elizabeth II. On April 28, 1969, we presented her with the gift of Burmese, a Musical Ride service horse.

Burmese became one of Her Majesty's favourite horses. She rode Burmese at the annual Trooping of the Colour, an impressive display of military pageantry to mark her birthday, for 18 years. Burmese passed away in 1990. The Queen has not ridden a horse at that event since 1987.

We presented Queen Elizabeth II with another police service horse during our centennial celebrations in 1973. This time, the Queen chose Jerry, a 3-year-old black gelding, out of a group of 5 horses during her visit to the RCMP stables in Ottawa on August 2, 1973.

Queen Elizabeth II wanted this horse to have the same training Burmese had received as a part of the Musical Ride. Jerry stayed in Canada until 1977 to complete his training as a saddle horse and for use in the RCMP Musical Ride.

When we presented the horse to Her Majesty at Windsor Castle on May 15, 1977, Jerry's name changed to Centenial (with one "n"). Centenial went to the Mounted Division of the London Metropolitan Police for crowd-orientation training.

On October 27, 1998 we presented Queen Elizabeth II with the gift of James, an RCMP service horse and trained Musical Ride horse. This was part of our 125th anniversary celebrations.

James, named after St. James Palace in London, was ridden by The Prince of Wales for the annual Trooping the Colour. He was also the veteran champion at the Royal Mews Horse Show in 2012 and went on to be National Champion at the Christmas show at Olympia.

We presented Her Majesty with the gift of George, an RCMP service horse, during the Royal Windsor Horse Show at Windsor Castle on May 16, 2009. This was to mark the 40th anniversary of our presenting Burmese to The Queen. During the presentation, Canadian actor Leslie Nielsen, whose father was a member of the RCMP, narrated a 2-minute video on the RCMP.

Since 2009, The Prince of Wales rides George for the annual Trooping the Colour.

We presented a young mare, Elizabeth, to The Queen as a private gift. It was in commemoration of her Diamond Jubilee, and upon Her Majesty accepting the title of Honorary Commissioner-in-Chief of the RCMP, on May 10, 2012.

Born on April 24, 2007, Elizabeth was named in honour of the Queen Mother, Her late Majesty Queen Elizabeth. The RCMP riding master and The Queen's stud groom selected Elizabeth for The Queen. The RCMP's riding master trained the mare before we sent her to Her Majesty.

Upon receiving Elizabeth, The Queen said she wanted to breed her and promised she would gift us Elizabeth's first foal. In 2018, she fulfilled that promise with 2-year-old filly, Victoria (see Victoria below).

In honour of Queen Elizabeth II's 90th birthday, Commissioner Bob Paulson presented her with Sir John, an 8-year-old gelding on May 12, 2016. We presented the gift to The Queen in front of Windsor Castle during the Royal Windsor Horse Show. As part of the event and birthday festivities, the Musical Ride also performed nightly at Windsor Castle from May 12 to 16.

The Princess Royal rides Sir John for the Trooping the Colour.

We selected these horses to join Her Majesty's stables based on their ideal size, colour and temperament.

We gifted the 2 horses to mark the 80th anniversary of our breeding program and the 50th anniversary of presenting Her Majesty with her first RCMP horse, Burmese. Commissioner Brenda Lucki and Minister of Public Safety Ralph Goodale attended a private ceremony at Windsor Castle to present Canada's gift to Her Majesty.

A gift from the Queen 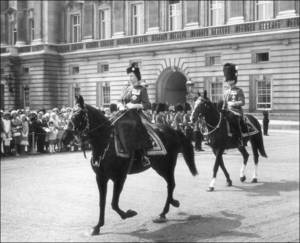 Her Majesty presented us with the gift of Golden Jubilee, a horse from her own personal collection. This took place at a ceremony at the RCMP stables in Ottawa on October 14, 2002. This gift was in recognition of The Queen's 50th year as reigning monarch.

In 2018, Her Majesty gifted us a young foal named Victoria. Elizabeth, the mare we gifted to The Queen in 2012, foaled Victoria in 2016. Her birth at Sandringham Estate made history as she was the first non-thoroughbred Bloodstock to be foaled there.

Victoria's name comes from a piece of North-West Mounted Police (NWMP) history, as the NWMP participated in Queen Victoria's Diamond Jubilee procession in 1897.