Police across Canada are dealing with rising catalytic converter thefts. The car parts help reduce harmful emissions by converting harmful pollutants into less-toxic compounds and contain precious metals like platinum that are valued on the scrap metal market.

A catalytic converter can sell for anywhere between $150 and $200, according to the Insurance Bureau of Canada.

"An offender can also remove a catalytic converter in less than two minutes," adds Cpl. Troy Savinkoff, with the Cochrane, Alta. RCMP crime reduction unit. "This is a rising crime that, years ago, was almost non-existent and now has become common place."

In Cochrane, the RCMP has reached out to vehicle-based businesses and scrap dealers offering security tips and conducted proactive patrols – some of which have caught offenders in the act.

Other traditional crime-reduction tactics, such as focusing on and targeting prolific offenders, are also helping police.

RCMP crime analyst Heather Russell has been tracking the issue in Saskatchewan and has seen a significant increase this year.

"It's spread right across the province. From the big cities to very small communities", says Russell, a member of the Saskatchewan RCMP Crime Prevention and Reduction Unit.

Other police agencies in the province have also received multiple reports.

Saskatchewan Government Insurance, which provides auto insurance in the province, says catalytic-converter claims have cost more than a half million dollars. 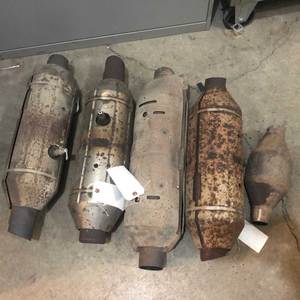 Those include parking inside or behind a locked fence, if possible, leaving vehicles in a well-lit area, and frequently checking vehicles parked for an extended time, such as a recreational vehicle or farm equipment.

Above all, report any theft or suspicious activity to police, says Ouellette.

"Even if you think it's a small thing," he says. "It gets reported, it gets recorded, and through those reports and records it can show a trend in an area and potentially lead to a suspect."