An RCMP officer's sled-pulling huskies are helping him forge connections and share safety messages with young people throughout the West Hants area in central Nova Scotia. 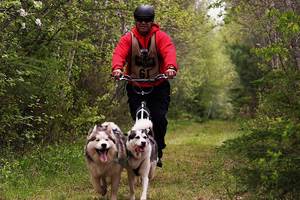 In his free time, Collins takes his dogs on trails throughout central Nova Scotia.

Cst. Richard Collins started mushing in his spare time a decade ago to exercise his dogs. Three years later, when he was posted to the RCMP's Windsor detachment, local schools invited him to bring in his dogs to demonstrate how they pull sleds in the winter and a modified bicycle in the summer.

During the demonstrations at schools, daycares, and community events, he shows how the mushing dogs work, explains the origins of the activity, and how he got started.

"It's combining two things I love to do. I love my job and I love my dogs," says Collins, who's been an RCMP officer for 22 years. 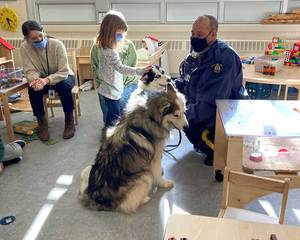 Cst. Richard Collins turned his dog-sledding hobby into a way to help him connect with young people.

While Collins receives many questions about his dogs during the demonstrations, it's also an opportunity to answer questions about the RCMP and how police can support local youth.

"When you see them again, they've already talked to you and you've built some rapport," says Collins. "It's another avenue for people to see us as part of the community and not just as police officers." 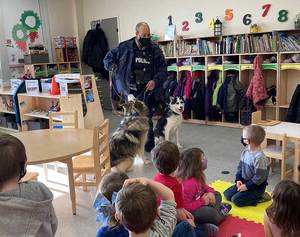 The dog demonstrations are one way Collins connects with young people in the community.

Sheldon States, principal at West Hants Middle School in Newport, N.S., has witnessed Collins' demonstration a handful of times and says it has a positive impact on students. "It's always a hit," says States. "Students will talk about it for a long time after he leaves."

The demonstrations are also an opportunity for students to see RCMP officers in a different light.

"It lets students know RCMP officers are humans, too, they have lives outside of the job, and they don't have to see an RCMP officer only when they're in trouble," says States.

Working with his dogs is just one way Collins connects with young people in the community. When he's not busy delivering classroom presentations on topics like Internet and social media safety, he'll stop by local hangouts to say hello and chat with young adults, and has coached local baseball and hockey teams.