Behind every good member is a dedicated civilian

Often overlooked yet a vital component of operational successes are the dedicated civilian employees of the RCMP.

While the responsibilities have changed over the years, the role of women behind the scenes has been a crucial one since the very beginning, starting over a century ago when the first jail matrons were hired to tend to female prisoners in the 1890s.

One of the most legendary women to infiltrate the ranks of the North-West Mounted Police (NWMP) was Katherine Ryan, or Klondike Kate as she came to be known. She reportedly first worked with the Mounties on her trek north, when she offered to cook for them if they helped carry her year's worth of supplies. The arrangement proved valuable, and upon settling in the Yukon, Klondike Kate was appointed as a special constable in 1900 by the NWMP to assist with female prisoners and to search potential female gold smugglers.

Women continued to play an integral role behind the scenes from the early 1900s on, when members in (primarily) isolated communities in one- and two-man posts relied heavily on their wives for support. While never formally recognized back then, women performed a range of duties to support police operations, from answering phones and taking complaints to searching female offenders and providing meals to prisoners. Many wives opened their homes to visiting judges, doctors, nurses and RCMP senior officers, providing lodging and meals, all while caring for their own families.

In 2013, 468 of those women from across the country were honoured by the RCMP (some posthumously) for this selfless support provided to their spouses, to the Force, and to their country. Inspired by the book, When the Second Man was a Woman written by Ruth Lee-Knight, Ivy-Anne Mitchell suggested the award to then Commissioner William Elliott in 2010. After countless hours and a lot of leg work by the RCMP Veterans' Association, the Second Man Award was established to recognize these women and their contributions, commitment and dedication. Both Lee-Knight and Mitchell were recipients.

Municipal employees, civilian members and public servants alike continue to work tirelessly to support police operations in a variety of roles. The longest serving public servant recently celebrated 55 years of service, which was a new milestone in the Force.

With over 10,000 civilian employees working throughout the Force, there are too many roles to highlight, but two that are seldom showcased are detachment clerks and operational communications centre (OCC) operators. Detachment clerks are the "heart of every detachment" and OCC operators are the people on the other end of those emergency calls – calls that range from alarms being triggered and domestic disputes to suicidal callers and bomb threats.

"Most of us get into these jobs because we're people helping people kind of people," says Heather Lewis, OCC Manager in D Division. "That's why I've spent my whole career here."

Beginning her career with the RCMP as a detachment clerk in a southern Manitoba detachment, it was a much different world back in 1977. Lewis used to answer calls from the community and dispatch local members. "We used paper index cards to maintain records of individuals charged with offences," recalls Lewis. It was all done by pen and paper with no electronic recording of information.

Detachment clerks are recognized as the "consistency" of the RCMP in each community. Unlike regular members who often have to transfer every few years, detachment clerks are usually from these communities. So when a position opened up in 1980 in the OCC in Thompson, Man., it was a difficult decision for Lewis to convert from a municipal employee to a civilian member and move to northern Manitoba, but she couldn't pass up the opportunity. 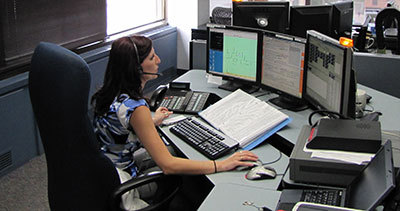 "There have been a lot of changes since then," comments Lewis, although member's safety has always been a top priority. "We used to have actual egg timers on our desk to time officers after we dispatched them to a call." They'd check on the officers after five minutes to ensure all was well. Of course everything is electronic and automated now, but they still monitor members when they respond to calls and check on all patrol units hourly. Whether operational members are out in the field or doing paperwork at their desk, OCC staff are true partners, in constant contact, working together on calls.

"Most of our new practices speak to officer safety," says Lewis while explaining the role of the OCC and the types of questions they ask callers. "We give responding officers as much information as possible about where, what, when, who and weapons, and we ensure all database queries are conducted prior to members attending calls. Officer and public safety are our priorities."

Training in the OCC has changed dramatically over the years, as it used to be on-the-job learning with no formal training. When Lewis became a manager six years ago, she, along with the OCC Training Co-ordinator, worked to develop consistency in training for call-taking and dispatching.

"Our OCC worked with others in the North West Region to adopt a formalized training program in 2009," explains Lewis, "and then on a national level to create the National Telecommunications Operator Training Program that became a mandated course in 2014."

"It's not an easy job, we take difficult calls and we must remain composed and get the job done," says the OCC veteran who misses wearing that headset and working with her operational partners. "There are days I just want to get out on the floor and take calls, but I do love my current job and being able to talk about the amazing work these wonderful people do."

Lewis sums it up by saying, "It doesn't matter what you do or what role you play, if you work for the RCMP, you'll have an amazing career."